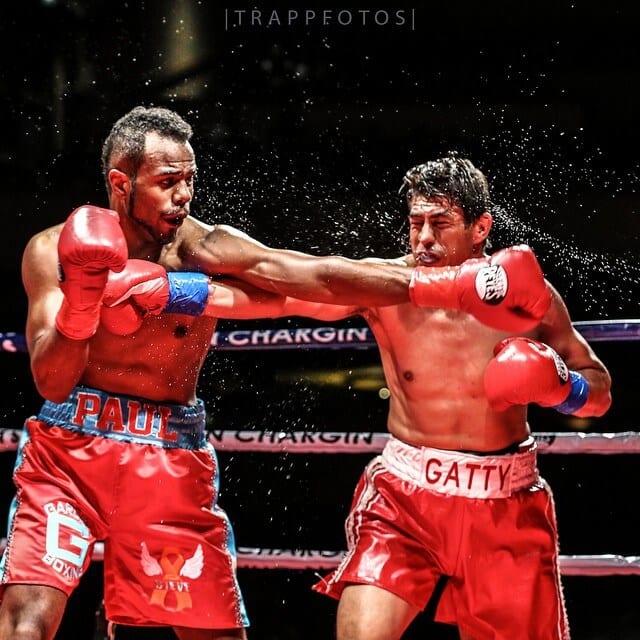 Middleweight Paul Mendez trained by the Garcia’s in Salinas, CA, is inching closer and closer to becoming someone that needs to have national exposure and attention after his performance against a game, but outclassed Ernesto Berrospe in the main event last Saturday in Redwood City, CA. The fight looked similar to the first bout in which Berrospe would come directly to Mendez who was more than willing to greet Berrospe, especially with his right hand, the one that Oscar De La Hoya has even made mention of via Twitter. By the third round, Mendez was able to weather the storm that Berrospe brought early as a wild exchange saw him get caught by a good left hook from Berrospe. That single shining moment was all that Berrospe saw as Mendez would stop him due to a flurry in the third round. Berrospe tried to complain about the stoppage, but it was more the fighter in him than grounded in reality.

In the co-main event Arturo Quintero of Relentless Boxing Gym in San Jose, CA earned a hard fought victory over Carlos Valenzuela. A wise man once said that all lopsided scores are not created the same as the 59-55 unanimous decision was the accurate score total, but did not tell the whole story. Valenzuela started fast and stole the first round , but gave Quintero a tough fight though out. Quintero was able to use body shots to make the game fighter have to move backwards in final stages of the fight and take over the fight.

Andy Vences of San Jose, CA earned a vicious second round knockout by turning southpaw and landing a hard shot to the body of Sergio Najera, whom he had fought the whole fight in orthodox prior. Vences’ is looking to get signed by a large promotion and is showing different facets to his game, some of which that he used more so in the amateurs. Vences who trains at Stockton, CA with Gabriel Flores Sr. is looking for a competitive fight this summer potentially against another unbeaten prospect type on a televised card. Vences continues to improve as he made quick work of the Najera to net another knockout for his record.

Ryan Bourland decisively defeated Zlatko Ledic, whom he faced in his pro debut. Bourland in his second time facing Ledic conserved his energy and was able to apply sustained pressure that Ledic was unable to match. Bourland recently added a strength and conditioning coach to his camp and has shown improved conditioning as he continues to apply his fast paced style upon foes and at a higher work rate than in past fights.

Eddie Croft trained boxer Ricardo Pinell defeated Yusmani Abreu in a competitive affair that saw Pinell edge a split decision over the Cuban fighter. Benjamin Briceno of the Kennel Boxing saw his new diet pay dividends as he scored a four round unanimous decision over Adrian Rodriguez. Prior to this bout, Briceno had been starving himself fight week to make weight as this marked the first time Briceno resembled the fighter most saw in sparring. In the opening bout Steven Zayas knocked out Jhonanthan Zamudio in the second round.