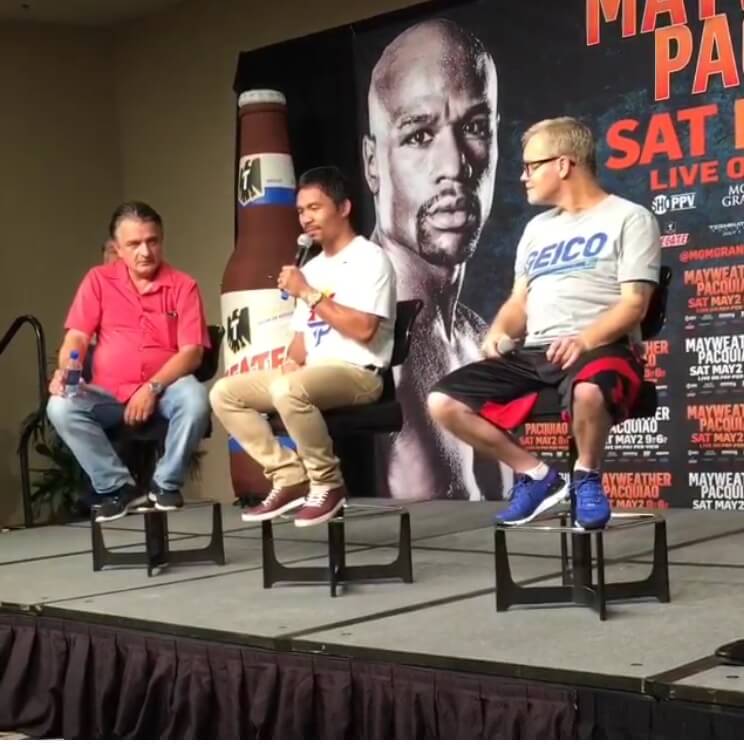 Today at 11:00 am PST, Manny Pacquiao, longtime trainer Freddie Roach and Top Rank bossman Bob Arum took the stage of the Mandalay Bay in the South Convention Center. The event was held four hours prior to the Floyd Mayweather grand arrival at the MGM Grand at 3:00PM PST and marked the overtone of dislike from both parties in doing business with one and another. 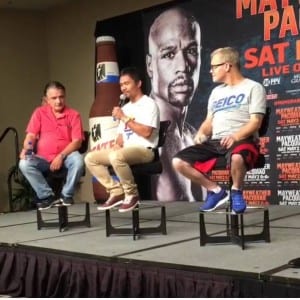 Though Bob Arum stated the reason for the separate event was to honor the Philippines, it was hard not to think back to last year’s event of Manny Pacquiao vs. Timothy Bradley II. Arum went ballistic fight week last year when Mayweather-Pacquiao ads adorn the halls of MGM Grand rather than Pacquiao-Bradley II. So it begins, the long and crazy fight week that will have more egos involved than any other boxing promotion in history. Neither man, views themselves as the “b-side”, “the opponent”, the guy who is coming into this fight to lose and for that reason neither wants to cater to others needs.

Then came the actual event which was highlighted by Freddie Roach explaining how much he loves eating out and how everyone wants to talk about the fight to Pacquiao explaining the fight is not personal, but he wants to win. The standard rhetoric of “the best training camp ever” was thrown around as well, but the most telling moment was when asked by a fan if he is happy not see Mayweather today and Pacquiao simply laughed.

It was jovial and without substance for the most part as Pacquiao and Arum talked about how much they admire each other and even Pacquiao explaining he would make the 83 year-old promoter a Filipino citizen as he retorted “…remember, I am a Congressman.” Yet, the most telling retort was the intensity Pacquiao displayed when asked about his drive for this fight as he responded “I still have my killer instinct!”