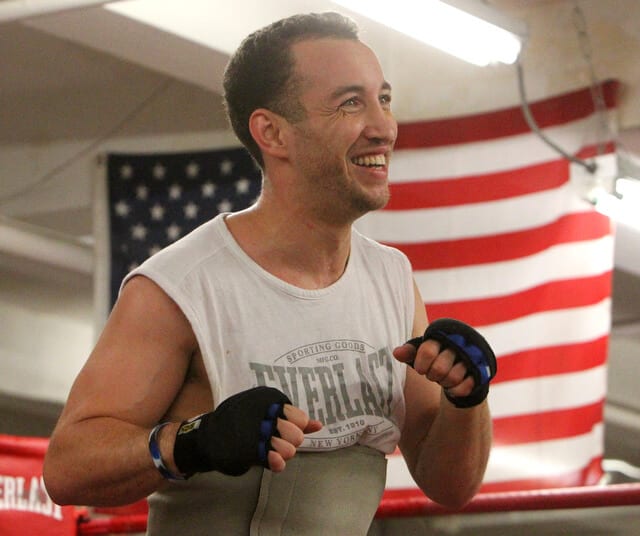 White Plains High School and U.S. Military Academy at West Point graduate Boyd Melson works out at the Mendez Boxing gym in Manhattan Nov. 22, 2011. He is raising funds and awareness for a paralysis cure after developing a relationship with a wheelchair-bound Port Chester girl. ( Peter Carr / The Journal News ) 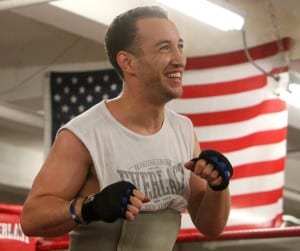 New York, NY  – This Friday night, for the second time this year, DiBella Entertainment will bring its popular Broadway Boxing series north to the suburbs of Westchester County with an exciting nine-bout card scheduled to take place at the beautiful Hilton Westchester in Rye Brook, NY. Headlining the card will be the much-anticipated ring return and homecoming of Westchester County-native Boyd Melson (14-1, 4KO’s), as he takes on fellow New Yorker Mike Ruiz (17-8, 9KO’s) in a 10-round super welterweight battle for the WBC USNBC title.

Also returning to action on the card for the first time in nearly four years will be the Bronx’s undefeated lightweight Danny Valle (5-0, 3KO’s) as he faces Brooklyn’s Ian James in a six-round battle of boroughs. The once-promising Valle, son of renowned trainer Victor Valle, was a NY Golden Gloves champion before turning pro in 2009. Valle reeled together five impressive victories and was garnering rave reviews around the local New York boxing scene. Valle then suffered an unfortunate string of injuries that forced him to step away from the ring. Now one hundred percent healthy, Valle is looking to once again embark on his professional career and pick up where he left off in 2011.

Returning to where he won his professional debut in dramatic fashion will be hometown favorite Alex Vanasse (1-0, 1KO) as he challenges Raymond Santiago in a four-round heavyweight matchup. Hailing from Carmel, NY, Vanasse had a raucous crowd on hand for his debut back in February. Vanasse and his army of fans suffered a major scare when he hit the canvas hard in the second round of his scheduled four-rounder. Vanasse battled back hard though, going to war over the next two rounds and finally stopping his opponent at 2:08 of the fourth round in a hellacious fight, sending the crowd into an absolute frenzy. Vanasse is looking to make it a perfect 2-0 against Santiago.

Scheduled to appear on the card in separate four-rounders will be nearby Nyack-natives, Max Tassy (3-0, 1KO) and Maxito Sainvil (1-0). The former NY Golden Gloves champion Tassy is set to square off against Ralph Johnson in a four-round light heavyweight matchup, while Sainvil takes on Anton Williamson in a four-round welterweight affair.

Also seeing action on the card will be one of the brightest young stars in the DiBella Entertainment stable, as 2012 Olympian Jonathan Alonso (4-0, 3KO’s) returns stateside to do battle with Bronx’s Jose Guzman in a six-round junior welterweight showdown. Alonso, nicknamed Maravilla, the same moniker used by his co-promoter and former middleweight kingpin Sergio Martinez (Maravilla Box Promotions), is truly something special to watch. With dynamite power in both hands and blazing hand speed, the 24-year-old Alonso has thus far looked as good as advertised. Alonso made his pro debut in August of last year on a Broadway Boxing card at B.B. King Blues Club in NYC, scoring a vicious third-round TKO over Jose Gomez. Alonso’s next three fights all took place in his adopted home of Spain, the country that the Dominican-native Alonso represented at the 2012 Olympics. Alonso will be looking to once again impress when he takes on the more experienced and always game Guzman.

In an eight-round battle of junior featherweights, Brooklyn’s Rafael Vasquez (14-1, 12KO’s) takes on Pedro Melo (11-8-2, 4KO’s). The 37-year-old Vasquez is a late bloomer, having not made his professional debut until September 2010. Since suffering a shocking loss (SD-8) to Jhovany Collado in 2012, Vazquez, who has absolutely devastating power in both hands, has stopped six consecutive opponents in a row, while quickly moving up the ranks of the 122lb. division. Vazquez is currently rated #7 by the World Boxing Association (WBA) and is looking to continue moving up the ranks and work his way into a title shot in the not so distant future, but he must first get by the Mexican Melo.

Set to make his US debut on the card in an eight-round super lightweight matchup will be former world-title challenger and former European champion Serhiy Fedchenko (33-3, 14KO’s), as he competes against Reinald Garrido (14-9-1, 2KO’s). The Ukrainian Fedchenko has been out of the ring since a shocking loss in December of 2013 to Felix Lora.  Prior to the loss to Lora, Fedchenko’s only other two defeats had come against former world title challenger Kaizer Mabuza and future hall of famer and multi-division world champion Juan Manuel Marquez. Fedchenko will be looking to shake off the ring rust and get some much-needed rounds in when he meets Garrido.

Rounding out the card will be undefeated super middleweight prospect Francy Ntetu (14-0, 3KO’s) as he puts his undefeated record on the line against hard-hitting Colombian Milton Nunez (28-13-1, 25KO’s) in an eight-round super middleweight matchup. Ntetu, who hails from Quebec, Canada, is co-promoted by Canada’s former light heavyweight champion Jean Pascal. It will be Ntetu’s second fight thus far of 2015, as the super middleweight looks to begin making the transition from prospect to contender.

What's Next For Weekends Winners and Losers