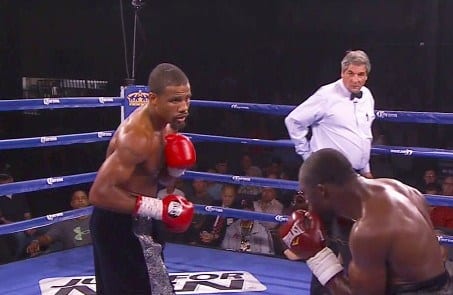 BoxNation (UK), 12:30 pm EST, Alexander Povetkin vs Mike Perez, Grigory Drozd vs Lukasz Janik. The main event of this bout could determine the next man to face either Wladimir Klitschko or Deontay Wilder for the heavyweight title. Another storyline is the face that this will be the second bout for Perez after basically killing a man.

ESPN2, 9:00 pm EST, Boxcino 2015 Finals: Andrey Fedosov vs Donovan Dennis, Brandon Adams vs John Thompson. This will be a bout that marks the end of an era as Friday Night Fights will be no more after the final Boxcino event. Friday Night Fights always provided a solid outlet for guys looking to make a name for themselves. John Thompson could be a player in the junior middleweight division if he earns a win in the tournament and the heavyweight bout winner seems destined for a big push as well.

FOX Sports 1, 10:00 pm EST, Eric Hunter vs Antonio Escalante, Abraham Lopez vs TBA. Not the world’s greatest card, but it is a another developmental card from Golden Boy Promotions as Abraham Lopez is showing promise in the lighter weight classes and Eric Hunter is a tough fighter who has a mean side that many enjoy as he isn’t your “I just want to have fun fighter”

NBC, 4:30 pm EST, Andre Dirrell vs James DeGale, Edwin Rodriguez vs Craig Baker. The vacant IBF super middleweight title is on the line in a bout that pits two of the best in super middleweight against one and another. This will be PBC’s third card on NBC it will be interesting to see how both the ratings and interest for this fight are this week. Edwin Rodriguez will be back in action on the undercard in a fight that appears to be a stay busy fight

CBS Sports Network, 1:30 am EST, Bahodir Mamadjonov vs Richard Commey. This card exists , but little interest will exist. Most people don’t get CBS Sports Network and even worse the production value isn’t high. It is a solid main event for a club level show and the broadcast taping makes this good for archival purposes, but is hard to merit a live viewing.

Jhonny Gonzalez to move up in weight