Fight week schedule for May 29th-30th 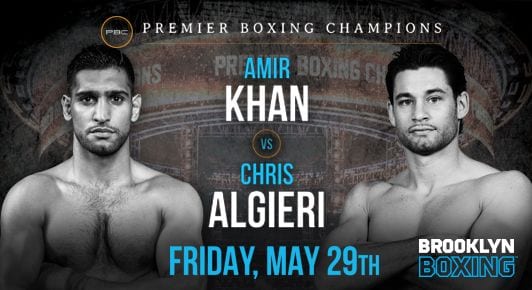 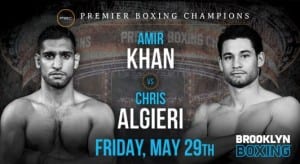 Spike / BoxNation (UK), 9:00 pm EST/PST (tape delayed on the west coast, Amir Khan vs Chris Algieri, Bryan Vasquez vs Javier Fortuna. Amir Khan returns against Manny Pacquiao foe, Chris Algieri, in a boxer versus boxer battle on Spike TV. This fight is essentially a fight to showcase Khan against a known opponent, the undercard features two good fights as Bryan Vasquez and Javier Fortuna fight for contendership at 130 lbs. and Heather Hardy takes on Noemi Bosques in her toughest test of the year.

CBS Sports Network, 10:00 pm EST, Lateef Kayode vs Nick Kisner. Kayode is best known for his odd interview after the Antonio Tarver fight in which he was banned from Showtime, probably forever. In Kayode’s last bout he was knocked out by Luis Ortiz. Kayode is now moving down in weight and fighting on an obscure network.

beIN Sports Español / Azteca (MEX), 11:00 pm EST, Javier Mendoza vs Milan Melindo. This is a flyweight title main event as Mendoza defends his IBF title. This is a matchup of two top ten guys, but the tough thing is with little promotion and a division that is very hot right, but

Khan believes Mayweather is hoping he looks bad against Algieri

Fight week schedule for May 29th-30th