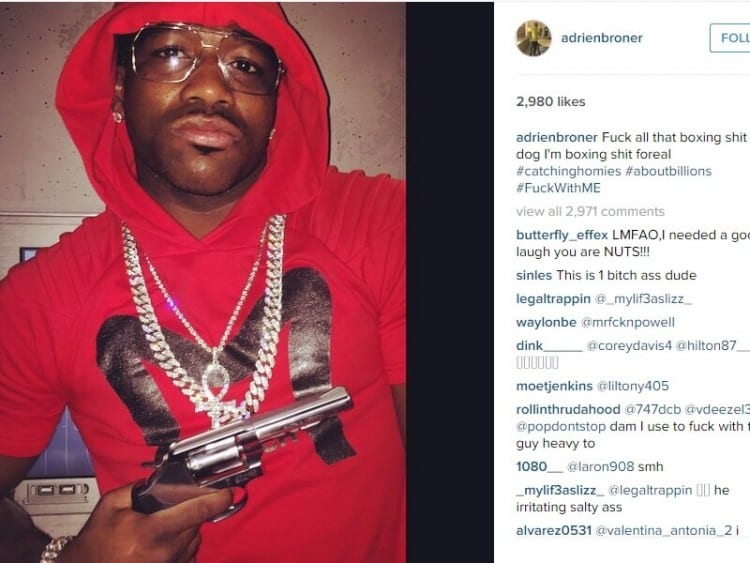 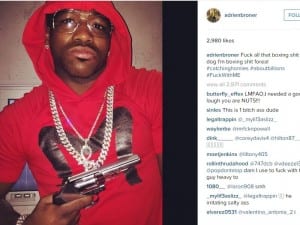 Troubled boxing star and three weight world champion Adrien Broner posted a shocking imagine on his Instagram account which he quickly deleted. In a cryptic message that seemed to imply references to street life innuendo, Broner posed with a gun explaining his indifferent towards boxing.

This comes after Broner was soundly beaten by Shawn Porter and appeared indifferent after the loss explaining that “…the fans will still want to take a picture with me anyway.” Broner also didn’t attended the press conference as well which seemed bizarre given the magnitude of the event and the fact that he was the main drawing feature.

On Monday night, Broner hit social media with multiple bizarre images that saw him posing with a gun and confessing his indifference towards the sport of boxing. Some felt the posts were in poor taste since they hit too close to home after the tragedy in South Carolina as well as other just felt that they not how a grown adult making millions of dollars should behave.

One thing is for sure, Broner might be on the verge of a rude awakening, the kind that only life can give you when you take things for granted as it appears that he might just be losing his luster in the boxing world and who knows where he goes from here, since well, boxing was supposed to be his day job.

Adrien Broner deleted the pictures hours after they were posted.

PBC Broner vs. Porter down 4% from last event in April

Adrien Broner is a confusing conundrum