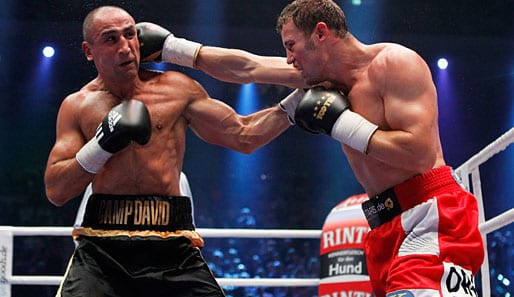 Actions speak louder than words – at least that was the motto at today’s final press conference ahead of the ‘Final Showdown’ between WBO World super-middleweight Champion Arthur Abraham (42-4, 28 KO’s) and Robert Stieglitz (47-4-1, 27 KO’s) on Saturday night at the Gerry Weber Stadium in Halle, Germany.

‘’This is not a fight that needs to be hyped,’’ said Sauerland. ‘’You need only look at the first three fights between Arthur and Robert to know what we have in store for Saturday night. I’m expecting another entertaining battle and a fitting end to their epic rivalry.’’

Following their three previous encounters, Abraham holds the advantage, with two wins to one defeat. As the fourth fight approaches, the defending champion made clear his intention to claim a conclusive third victory.

‘’This is the end,’’ said the 35-year-old. ‘’There will be no fifth fight. I’ve trained extremely hard and I’m ready for whatever Robert has to offer. After Saturday, there will be no questions remaining. I will prove once and for all that I’m the better boxer.’’

The challenger from Magdeburg remained unfazed by his opponent’s comments instead renewing his promise to regain the WBO crown.

‘’I know how to beat Arthur, and I’m ready to settle the score,’’ said Stieglitz. ‘’In my opinion the verdict from our last fight was unjust, but it’s not about the past. It’s about the here and now, and on Saturday I will become world champion again!’’