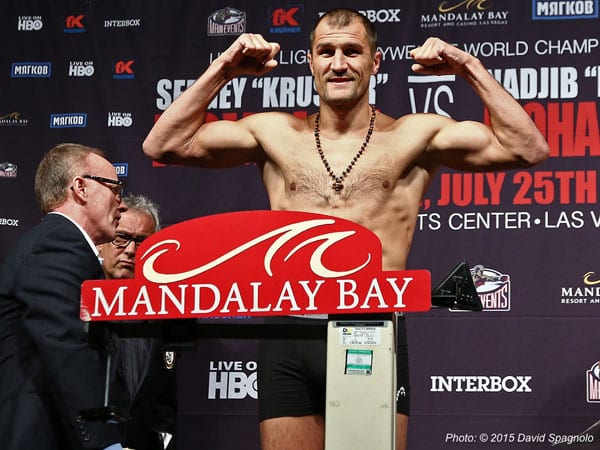 IBF, WBO and WBA light heavyweight champion Sergey Kovalev (28-0-1 25KOs) knocked out Nadjib Mohameddi (37-4 23KOs) in the third round in the Main Event of HBO Boxing telecast from Mandalay Bay Events Center in Las Vegas, NV. Kovalev outclassed the relatively obscure to American airwaves, Mohameddi, who was out jabbed in the first round, sent to the canvas in the second holding to survive the last seconds of the rounds with the end coming not much later. The end came late in the third round as Kovalev walked into a straight right hand that appeared to cause orbital bone damage as well as break Mohameddi’s nose.

For Kovalev, the fight was personal as Abel Sanchez, the trainer of Mohhameddi, was Kovalev’s trainer prior to working with current trainer, John David Jackson. In the build up to the fight Kovalev refused to call Sanchez a training explaining that Sanchez kicked him out of the gym and told him he would never be anything as well as ‘never teaching him anything’.

“I wanted to continue…to make this longer fight, but it what happened.” Kovalev explained when asked about the Abel Sanchez storyline. “I am ready for any fighter, this is sport, and if the fans want to see it, I will be happy.”

In a wild opening brawl, Jean Pascal (30-3-1  17KOs)  defeated Yunieski Gonzalez (16-1 12KOs) in a highly debately victory in the light heavyweight division.  Pascal who was loudly booed after the fight as the crowd felt that Gonzalez had won the bout after putting together a solid outing.

Gonzalez started applying a ton of pressure on Jean Pascal which seemingly was startling as it appeared that the bout was created to set up a Pascal-Kovalev rematch. After four rounds it was clear Gonzalez was taking over the fight as Pascal moved well, but looked to potshot and emulate his former trainer, Roy Jones Jr. with his defensive stylings. In the sixth round Pascal began to come on strong as it appeared he rocked Gonzalez who was slowing in pace.

In the final rounds, it appeared the fight was somewhat close as both fighters were exhausted and unable to muster much as to the person juggling watch two fights at once, like myself, it appeared Gonzalez was in control. In the ninth in fact with less than 20 seconds left in the round, Pascal was hit with an odd looping right hand that came close to dropping Pascal who held for the final duration of the bout. The final bell sounded as Pascal earned the victory to the dismay of those in attendance as Gonzalez had gotten the respect of those who paid admission and wanted to see himself get the victory

Sergey Kovalev: I will get my belts back…last time I ran out of gas