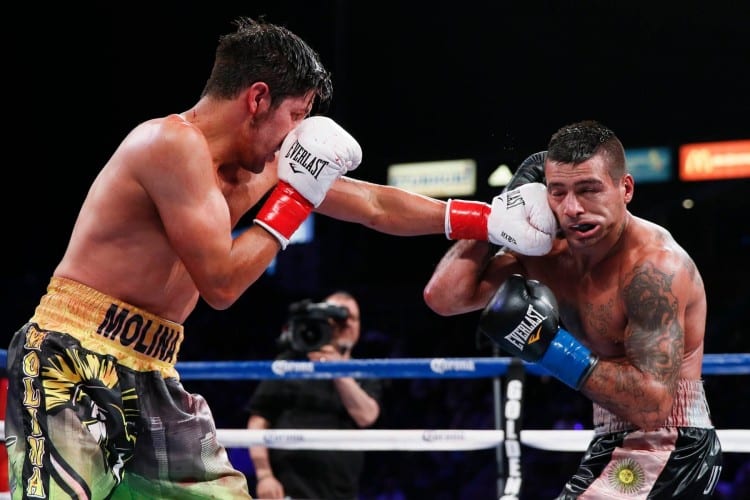 LOS ANGELES (July 30, 2015) – On October 3, one of the most exciting fighters and fearsome punchers in boxing, Lucas “La Máquina” Matthysse (37-3, 34 KO’s) will take on the dangerous and undefeated Viktor “The Iceman” Postol (27-0, 11 KO’s) for the vacant WBC World super-lightweight championship at StubHub Center in Carson, Calif. Presented by Golden Boy Promotions in association with Arano Box Promotions, Top Rank, Inc. and ELITE Boxing Promotion, the championship event will be televised live on HBO Boxing After Dark beginning at 10:15 p.m. ET/PT.

Below is what the fighters and their teams had to say about the upcoming showdown on Oct. 3:

“Postol isn’t anything big; he boxes well, but that’s it,” said Lucas Matthysse, former interim WBC super-lightweight World champion. “I saw part of his fight against Selcuk Aydin but other than that there aren’t very many videos of him on the Internet. I’m not taking him lightly, though, because he’s at the top of the rankings for a reason.”

“Postol is tall like John Molina, but Molina came to fight,” Matthyysse continued. “Postol, I don’t think so. He moves his left very well, fights at a distance, seems fast on his feet, and has excellent head movement. Against Aydin, he got off to a slow start but then dominated and got the knockout. He’s good, but I’m confident that I’ll be the WBC World champion.”

“I am glad that I am finally getting my chance to fight for the WBC world title after all those hurdles and delays,” said Viktor Postol, top super lightweight contender. “To get to this fight I had to go through 6 years of hard work and dedication in the gym and in the ring. I am ready mentally and physically to win this fight and bring the world title back to the Ukraine!”

“Lucas was the winning half of the 2014 fight of the year and once again came out on top of what nearly everyone considers the 2015 fight of the year – if fans want action, they know where they’re going to get it on Saturday, October 3,” said Oscar De La Hoya, Chairman and CEO of Golden Boy Promotions. “Lucas knows that a victory here would not only earn him the WBC World super-lightweight belt but would establish him as the clear top fighter in the division. With so much opportunity, I fully expect he’ll put on a dynamite show at StubHub Center.”

“Viktor is a tremendous boxer-puncher, and we give him a helluva shot to beat Lucas Matthysse,” said Boxing Hall of Fame Promoter Bob Arum of Top Rank, Inc.

“We’re going to work for this fight with the same or even greater responsibility than for Matthysse’s previous fights,” said Mario Arano, President of Arano Box Promotions. “I know Lucas will beat Postol by way of KO. After this fight, we want Manny Pacquiao because even Bob Arum has mentioned the possibility of this fight happening. I’m sure our team at Golden Boy Promotions will work to make it happen.”

“After Postol, as the WBC World Champion, Lucas will be more than ready for mega-fights, Arano said. “That’s why we want Pacquiao. Hopefully, it can happen. If not, we’re ready for anyone. Too bad Mayweather will retire. Honestly, I truly believe the only fighter in the world that can beat Floyd is Lucas Matthysse.”
“We are looking forward to another great event with Lucas Matthysse who proves himself time after time to be one of the best fighters in the super lightweight division,” said Vadim Kornilov, manager for Viktor Postol and President of VK Management. “After the Provodnikov fight in which Lucas came out victorious, this fight is kind of like a revenge fight for our whole team, and we will make sure to not let this one slip away.

“In the last 10 years our company has done a lot to develop professional boxing in the Ukraine,” said Stepan Chernovetskiy, President of ELITE Boxing Promotions. “Viktor Postol has been one of our top prospects and we have done a lot to get him to a world title shot specifically with the WBC, which is one of the most respectable organizations. Viktor is a very good and technical boxer; myself and all of Ukraine will be supporting him in this fight, and he has everything in order to win!”

“After giving fans one of the most riveting fights of 2015, Lucas Matthysse returns to face undefeated Viktor Postol, as these super-lightweights battle to capitalize on a well-earned opportunity to win a first world title,” said Peter Nelson, HBO Sports Vice President of Programming. “Having been home to so many memorable fights in recent years, the StubHub looks to have another in Matthysse-Postol, and we are privileged to present it to our subscribers October 3rd on Boxing After Dark.”

One of boxing’s most popular fighters, Lucas “La Maquina” Matthysse (37-3, 34 KO’s) has achieved that status with good reason, as his one-punch knockout power and aggressive attack in the ring always makes for exciting bouts earning him the BWAA 2014 Muhammad Ali-Joe Frazier fight of the year honors. Hailing from Trelew, Chubut, Argentina, the former interim WBC junior-welterweight World Champion has shown the best form of his career in recent bouts, with wins over John Molina, Roberto Ortiz, and Ruslan Provodnikov not only giving him a three-fight winning streak, but putting him on the verge of winning the WBC super-lightweight World championship on October 3.

A boxer with the style to give anyone trouble on fight night, 31-year-old Viktor “The Iceman” Postol (27-0, 11 KO’s) refuses to get rattled in the ring. After two recent wins in the United States over Selcuk Aydin and Jake Giuriceo, fans in America are starting to see just how good the Kiev, Ukraine native is. The number one contender for the vacant WBC super-lightweight title, Postol has scored professional wins over former World champion DeMarcus Corley and respected contender, Hank Lundy. This fall, he hopes to add the name of Lucas Matthysse to the list of fighters he has vanquished on his way to earning him World champion status.