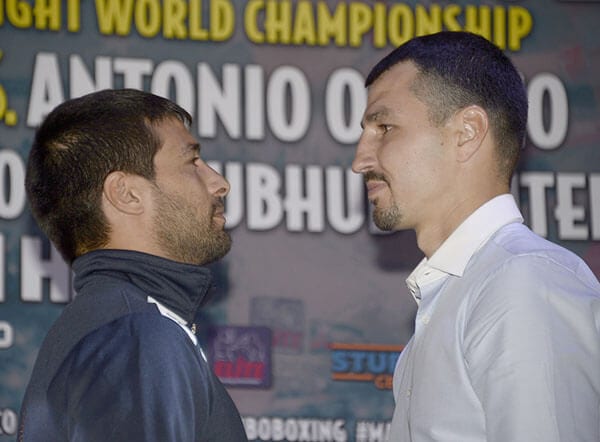 Below is what the fighters and their teams had to say about the upcoming showdown on Oct. 3:

“I’m very delighted to be fighting for the world title against Viktor Postol and to share the card with Humberto Soto and Antonio Orozco.

“I’m very delighted that the time has come for me to fight for the world title.

“What can I say? I’ll see you on October 3. I am excited to be back in Carson. The fans can expect a great fight.”

“Thank you to ELITE Boxing, Golden Boy Promotions, Top Rank, HBO and my trainers, Freddie Roach. It’s going to be a great event.

“This is my third fight in the U.S. I’m glad it’s happening in Los Angeles at the Stub Hub Center.

“Los Angeles is a second home to me; it’s where my training camp is. I know that Lucas will have more fans there, but it makes me happy to know I will have support there, too on fight night.”

“Thank you to HBO, Golden Boy Promotions, and my team for always being on top of my career and my health.

“As the saying goes, third time is a charm. I hope it’s true because my two others fights this year have fallen through. I will be ready and in the best of shape for October 3.

“I want to thank Antonio Orozco for taking this fight. He is a tremendous fighter. It will be a great fight for the fans. The fans that pay for a ticket are going to enjoy it. They’re going to be the winners on October 3.”

“Come October 3, I will face a very experienced fighter who will demonstrate why he is a former world champion, and I will show the fans why I am still undefeated. I am sure he will bring his best. I know it will be a fight fans will enjoy.”

“We are happy to be back at Stub Hub Center. It’s a great venue. Golden Boy Promotions hopes to host many more championship fights there. We are already ahead on ticket sales. Tickets are moving fast, and we are expecting a sell-out.

“We want these fighters to be tested. There comes a time in every fighter’s career where they need to be tested. This will be the toughest fight in Antonio Orozco’s career, and he is putting up his undefeated record against Humberto Soto for it.

“Humberto Soto is always up there in the rankings with the best around the world. He is a hero in Mexico. He wants to be able to fight and become a champion once again. He had a bit of bad luck earlier this year when he was supposed to fight Frankie Gomez. We want to thank HBO for the opportunity to show his fight again. HBO believes in this fight and in Humberto Soto-they believe he will make a good fight on October 3.

“The fans have given him the title ‘The Machine’ and Lucas Matthysse really deserves that title. The last time he fought at Stub Hub Center against John Molina it was determined to be the ‘Fight of the Year’ in 2014 by the Boxing Writer’s Association.

“We constantly get asked by fans on social media about Lucas Matthysse: ‘When is he fighting next?’ and ‘When do tickets go on sale?’ He is one of the top fighters that the fans want to see. Lucas never puts on a dull fight. Lucas is looking to become the world champion, defend the title, and then move on to bigger things.

“He will always put up a good fight. Lucas is the top fighter in Argentina, and in the U.S.. He is becoming one of the top guys here, and around the world.”

“Working with Golden Boy Promotions is always good, we never have any problems.

“I know Viktor is kind of an unknown in this equation but he has proven himself before against (undercard of Alvarado – Marquez on HBO). He was a contender back then but no one knew who he was. On October 3, Viktor will show he is not just another fighter from Europe. He has the experience to come on this stage and fight Lucas Matthysse.

“What Lucas did with Molina and Ruslan, you can’t deny that. Viktor will make this a good fight because he won’t let Lucas win by knockout.”

“Good afternoon, everyone. Freddie Roach, Viktor’s trainer, isn’t here so I’m in charge today. Thanks to everyone for making this fight. We hope to see you on October 3.”

“Thanks to everyone, Golden Boy Promotions, and the Stub Hub Center. Whenever we do a fight at Stub Hub, magic seems to happen there. We’ve had great fights there.

“Our ratings have been great on HBO Boxing After Dark and we expect to do great business October 3 with Matthysse vs. Postol and Soto vs. Orozco.

“If you want to see this fight live on the West Coast, you have to buy tickets to watch it in-person at the Stub Hub Center. For those of you watching it on HBO, we will have a great telecast for you on October 3.” 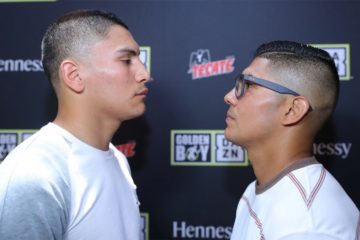