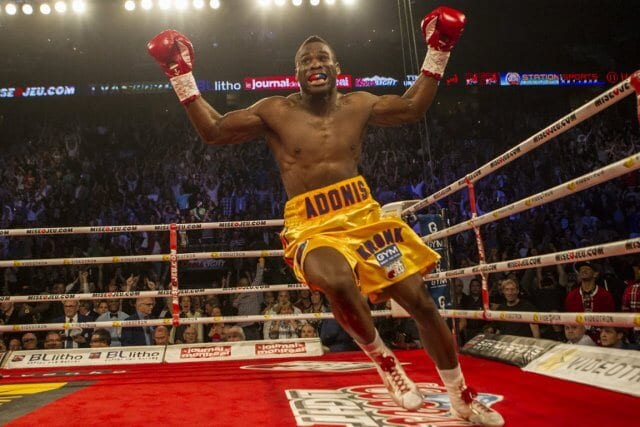 Groupe Yvon Michel (GYM), in association with Global Legacy Boxing (GLB) and Maple Leaf Sports and Entertainment (MLSE), is proud to officially announce the next world title defense of feared puncher, Adonis “Superman” Stevenson, September 11, at the Ricoh Coliseum in Toronto. The event is part of the prestigious Premier Boxing Champions series, airing live on Spike TV in the United States, on Indigo and Bell TV in Canada.

Stevenson (26-1-0, 21 KO’s), of Montreal, one of the most powerful pound-for- pound punchers in the world, will defend his World Boxing Council (WBC), The Ring Magazine and lineal light-heavyweight (175 pounds) world championship belts for the sixth time, against WBC No. 9 contender Tommy “Kryptonite” Karpency (25-4-1, 14 KO’s), the skilled American southpaw fighting out of Adah, Pennsylvania. It was Stevenson’s wish to defend his titles in Toronto:

“I’m excited to announce my next fight on September 11 in Toronto against Tommy Karpency. I’m ready to put the hurt on. I work hard and stay focused”, said the champion.

The 29-year-old Karpency pulled off a major upset October 4, 2014, at the Foxwoods Resort of Mashantucket, Connecticut, defeating former light-heavyweight lineal champion Chad Dawson by way of a split decision. Karpency, who has won his last four fights, is also the current Pennsylvania and NABA-USA light-heavyweight champion. He is particularly excited to get this world championship opportunity.

“I beat the same guy Stevenson beat to become world champion. I beat him [Dawson] just over a year after Stevenson beat him. After that win, I said that the sky was the limit and that I wanted the best in the world. The win [over Dawson] proved that I belong amongst the elite at light heavyweight. Now it is my job to win this fight”, explained Karpency.

“GYM is thrilled to bring this world championship fight and the ‘Premier Boxing Champions’ series to Toronto for the first time,” GYM president Yvon Michel said. “We have been contemplating this project for a long time. This has been possible because we found great partners with Les Woods and Lennox Lewis, from GLB, and Wayne Zronick, from MLSE. We have the conviction to bring a major boxing event that this prodigious sport city deserves. Even more, we also believe we have found the required partners to guarantee the success of the project and to do it again on a regular basis.”

“It is an immense privilege to be working alongside MLSE and GYM,” GLB president Les Woods added. “Global Legacy’s mandate of reviving world-class professional boxing in the wonderful city of Toronto has become a reality. “To continue the legacy my grandfather created and reignite a passion for ‘the sweet science’ across the city is a vision and accomplishment I hope will continue to leave a lasting imprint now as well as on all future generations of boxing fans.”

Also part of this promotion is the former undisputed heavyweight champion of the world, Lennox Lewis. While not fighting anymore, he stills as the passion for his sport. Lewis defeated Mike Tyson, Evander Holyfield, and Vitali Klitschko among the more notable victories during his illustrious career.

“It’s wonderful to be a part of GLB, working in conjunction with GYM and MLSE, to revive boxing in Toronto and across Canada to the highest level,” Lewis remarked. “As the former undisputed heavyweight champion of the world, I am proud to be building a nationwide platform where boxers, such as world light heavyweight champion Adonis Stevenson, can showcase their talents at home and receive the support they deserve.”