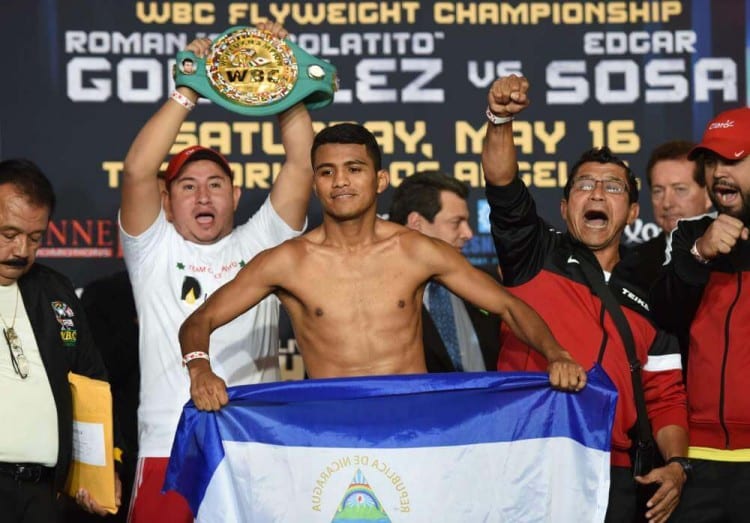 GONZALEZ vs. VILORIA is presented by K2 Promotions in association with Teiken Promotions.

“I want to thank God, my Teiken family, especially Mr. Honda and my team for helping me fight again in the United States and now on the HBO Pay-Per-View platform,” said Gonzalez. “I know Brian Viloria is a great champion, and it will be a hard fight, but I am ready for the challenge. I have faith that God will give me the strength to keep training and be able to give all my fans my best fight ever.”

“I’ve fought and won on the world’s biggest stages against the best of the best. I’ve prepared my whole life to win at every level of competition from World Amateur titles to the Olympic Games to professional world titles. And this fight, against Roman Gonzalez, is likely to be my biggest challenge yet. But, it’s Roman’s biggest challenge too. This is the realization of my dreams, and I will make the most of it on fight night,” said Viloria.

“I applaud Roman for accepting this fight, together, we will give boxing fans something special, something they can talk about for a very long time.”

“We’re thrilled to welcome back Roman Gonzalez as the co-feature once again to one of Gennady’s fight, his performance at the Forum in May was extraordinary and made for a terrific pairing,” said Tom Loeffler of K2 Promotions.

“With Roman defending his title against former world champion Brian Viloria, one of the best flyweights in the world, fans in the arena and those watching on HBO Pay-Per-View will see an outstanding battle as the lead-in to Golovkin vs. Lemieux.”

“On Oct. 17th, fights fans are going to be treated to a tremendous night of action headlined by not only the spectacular Golovkin-Lemieux main event, but also a terrific co-feature starring ‘Chocolatito” Gonzalez and Brian Viloria,” said Mark Taffet, Senior Vice President, HBO Pay-Per-View. “’Chocolatito’ was spectacular in his HBO debut last May and Brian is the essence of an intense competitor. The co-promoters of this event are determined to deliver tremendous value to boxing fans on Oct. 17 at Madison Square Garden, and we are delighted to be presenting the card on the HBO Pay-Per-View service.”

The 28-year-old Gonzalez, of Managua, Nicaragua had a sensational debut on HBO at The Forum in Los Angeles on May 16 stopping former world champion Edgar Sosa in the second round in front of a huge crowd of over 12,000 Southern California boxing fans. The fight was the HBO televised co-feature to Gennady Golovkin’s sixth-round stoppage of Willie Monroe.

The knockout of Sosa, Gonzalez’s ninth straight stoppage, was lauded by the international boxing media who also praised K2 Promotions and HBO for providing Gonzalez the opportunity to showcase his skills on the sport’s biggest stage.

Gonzalez is currently ranked No. 2 in the ESPN and Ring Magazine’s Pound-For-Pound ratings.

A member of the 2000 U.S. Olympic Team, the 34-year-old heavy-handed Viloria has thrilled boxing fans worldwide with his spectacular performances throughout his career.

Since parting with his WBA/WBO flyweight titles in a very close, split decision loss to Juan Estrada in April 2013, Viloria has stormed back to the win column with four sensational victories including three by knockout.

Most recently Viloria stopped former world title challenger Omar Soto in the first round on July 25 in Hollywood, California.