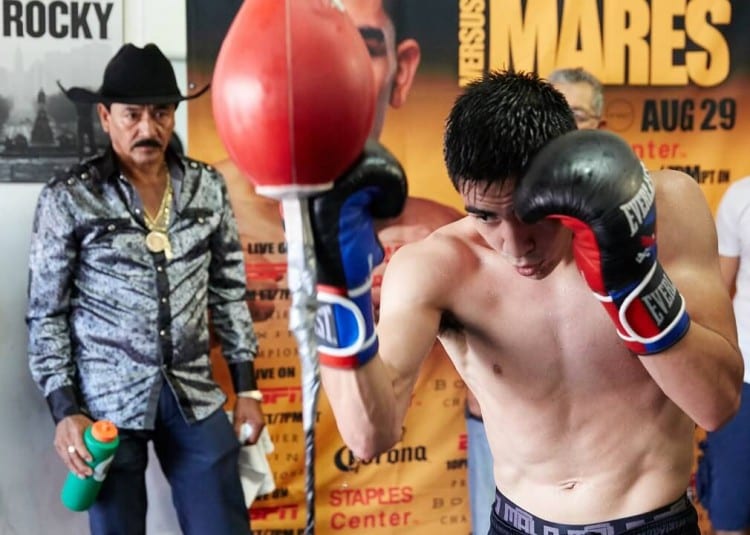 workout, PBC, LA Staples, Aug 29th 2015
Undefeated two-division world champion Leo “El Terremoto” Santa Cruz held a media workout Tuesday at the Who’s Next Boxing Academy in La Puente, Calif., before his showdown with Abner Mares on Premier Boxing Champions on ESPN on Saturday, August 29 airing live from STAPLES Center in Los Angeles.
Santa Cruz worked out for media, conducted interviews and was even presented with a birthday cake in celebration of his 27th birthday, which was Monday. The band Las Voces Del Rancho was on hand to sing him “Happy Birthday.”
Tickets for the event, which is promoted by TGB Promotions, are priced at $25, $50, $75, $150 and $300, not including applicable fees and service charges, and are on sale at AXS.com or by phone at 888-929-7849 or at STAPLES Center.
Here is what Santa Cruz and his father had to say at the workout today:
LEO SANTA CRUZ

“We’re going to show everyone that we are on top when we’re in that ring. This has been a great promotion and we have hope that it’s going to be a big fight.”
“I have been in other big fights and I’m doing everything to prepare for my audience and fans. They respect our team and they are the reason why we are doing this fight. I’m going to continue to fight for my fans and I’m going to do it until I’m the best in the sport.”
“I’m 100 percent with my strength and conditioning. We’re ready to go 12 rounds if it takes that long.”
“I’m very determined to win this fight. It’s the biggest fight of my career. I have a lot to lose I have a lot to prove. I want to prove to all of the fans that I deserve to be on this level. A win against Mares will put me on the level to get more big fights.”
“I wanted this fight three years ago and they said I wasn’t on Mares’ level. I said I was going to work hard to get on that level so one day we can make it happen and here we are.”
“This is the toughest fighter I’ve faced. A fight against him will be the biggest of my career. Even bigger than my first title. Mares has a bigger name, everything is bigger.”
“With two Mexicans fighting, it’s always a war. There have been a lot of great battles like that in the past and I think this will be too. We could end up with a trilogy of fights.”
“We both have our fan base in Los Angeles and this fight will determine who is the king and who gets all the fans.”
“My dad has always been there since the beginning. I’ve always been comfortable with him. He’ll scream at me and tell it like it is.”
“I think Abner moves more since his loss to Jhonny Gonzalez. He knows this fight is very important for him. There’s a lot to lose for him too. I think he’s going to bring everything this fight. That makes it an even better fight for the fans.”

“Leo is ready in his diet and in the way he trains. He won’t play games. He listens to what I say because he is a good boxer and he will do whatever is needed because he knows Abner is strong.”
“This is a huge party for Los Angeles. They are both from LA and everything about this fight is Los Angeles.”
“He’s going to be on top of things the minute he needs to be. But he’s going to fight with intelligence. It’s a big fight, my son and Abner are very popular and I’m sure it’s going to be a great fight.”