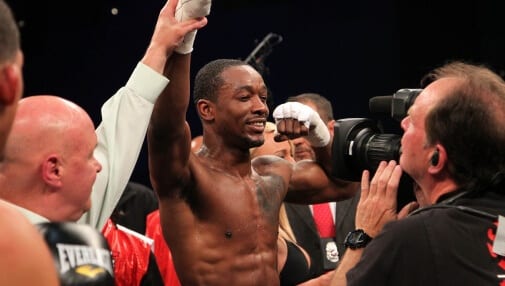 Thompson joins Willie Monroe Jr. as the second Boxcino champion to fight for a world title in a five-month span.

Thompson gained the opportunity on the strength of winning the Boxcino 2015 Jr. Middleweight tournament with wins over Ricardo Pinell (10-1-1), Stanyslav Skorkhod (9-0) and a second-round stoppage over Brandon Adams (17-1).

“I am excited. These doors keep opening, and I just walk through them and close them. I have to do my job. I am going into this fight making sure that I am in tip-top shape. For me, the Boxcino tournament was a great opportunity to be established. It is a strong platform to show my talents. I fought very tough competition, and I knew from the beginning that’s how you get prepared for these types of fights,” said Thompson.

“I am very proud of John. He was a last-minute replacement in Boxcino. He went on to win the tournament in style by scoring a spectacular knockout over the heavily favored Brandon Adams. When the opportunity came about to fight Liam Smith for the title, John jumped all over it and said make it happen. John is a real fighter and understands when these types of opportunities come up, they are few are far between, and he jumped at the opportunity to fight for the WBO Jr. Middleweight world championship,” said Arthur Pelullo of Banner Promotions

Said Vito Mielnicki, President of GH3 Promotions, “John was the first fighter I signed at GH3 Promotions. He always has taken the tough fights as you look at his history. I feel he is by far the more dominant fighter in this fight, and he will show his talent on October 10. It won’t matter that he his going into Smith’s Backyard, John will put on a great performance.”

The Smith – Thompson bout will join the WBO Middleweight title fight between Andy Lee and Billy Joe Saunders, as well as Terry Flanagan defending his WBO Lightweight title against Diego Magdaleno, which will make up a championship tripleheader on October 10th from Manchester, England.