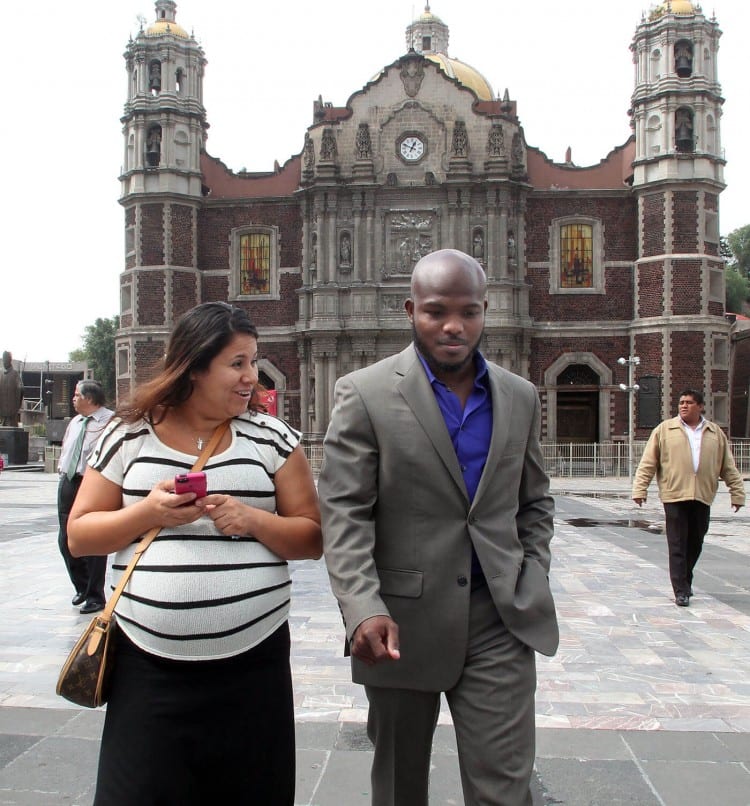 June 21, 2013, Mexico City, Mexico --- Undefeated WBO World Welterweight champion Timothy Bradley and his wife Monica visit Mexico's holiest Catholic shrine, the Basílica of Guadalupe, where the 'miraculously' imprinted image of the Virgin Mary (Our Lady of Guadalupe) on the cloak of Juan Diego is housed. Bradley was in town for a press conference with four-division champion Juan Manuel Marquez to announce their upcoming Saturday,Oct 12 world championship fight at the Thomas & Mack Center in Las Vegas,Nevada. Promoted by Top Rank®, in association with Zanfer Promotions, Wynn Las Vegas, Márquez Boxing, and Tecate, Bradley vs. Márquez will be produced and distributed live by HBO Pay-Per-View®. --- Photo Credit : Chris Farina - Top Rank (no other credit allowed) copyright 2013

In a random bit of news this week, Tim Bradley, the recently crowned interim WBO welterweight champion, has split with his longtime trainer Joel Diaz. You might be asking why it took ITRBoxing.com so long to report it? Well, we tried to figure out what the heck happened.

Below is a statement Diaz put out regarding the decision.

Don’t judge Tim for the decision he made. I knew it was not him making those changes, and he is right he would never disrespect me and my family. I got much respect for him and his father and mother. We started this together and we created something big together along with the team that started with us, but along the road people jump in the bus and change everything. Tim is a great person at heart, and he’s very humble, but it’s out of his hands. Too many negative approaches around him. God bless Tim Bradley. Wish you nothing but the best.

The weirdest thing is nothing is transparent. Bradley has stated publicly that the decision which was reached by his side was made official to Diaz last Sunday, was not the choosing of his wife despite some early reports. Diaz seemed to hint at the fact that people around Bradley are the reason for the change, but both sides wish for the true reasons to be kept behind closed doors.

Bradley is now debating about training with television analyst and boxing trainer, Teddy Atlas or Buddy McGirt as the replacement for Diaz. Though both have had success, it is a bit of a head scratcher since neither really has fighters in Bradley’s division nor have been training fighters performing at the highest level as of late.