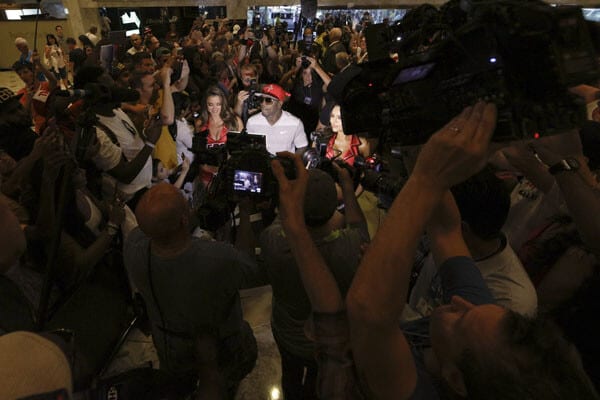 The countdown to Floyd “Money” Mayweather vs. Andre Berto” continued Tuesday afternoon as Floyd Mayweather, Andre Berto and undercard fighters made their Grand Arrivals at MGM Grand in Las Vegas before their pay-per-view fight this Saturday.

“To become great, you have to follow greatness. To become a great leader you have to be a great follower. I want every fighter to stay focused and on a parallel path. I’ve done a lot for this sport. Everyone used to be focused on heavyweights. My ultimate goal was to have everyone focus at whatever weight class I was, in my weight class. I’ve always been able to make noise at whatever weight class I was in. We want Andre to believe in himself and his skills. Every fighter that I’ve ever faced had the remedy to beat me, but the results have always been the same. I don’t overlook anyone, he’s a tough competitor, and we will just have to see what happens on Saturday. My ultimate goal is that we can find another Floyd Mayweather. When I turned professional I was a teenager and the MGM was Mike Tyson’s building. I’m just blessed and I feel like I was dealt a royal flush.”

“I had a tremendous training camp. I am in better shape than I’ve been in years. I’m looking forward to making history on Saturday. I don’t know anything about any code that Mayweather has. When I want to walk through a door I just break through.”

“This is my first defense so I’m excited and absolutely ready for Saturday. He says he is going to win, but we’ll see how it goes on fight night. I’m ready to go. I’m ready to knock him out.”

“I’m feeling great, really focused and had a great camp. On Saturday all I have to do is be myself and I will get the job done. Jack is a good opponent but he is not as good as me. I appreciate all the support I am getting from the Brit fans, some of whom are here today. This is going to be a good week.”

“I am very proud to be on this card and what better way to be a part of it than against Salido again. We all know Salido’s style: he falls and is used to getting up and continuing to fight. This is going to be a tough fight like our last one. But I am going to do my best and do what I can to win again.”

“I’m ready to bring on the war, give it everything I’ve got and looking for a big win. I know I made a lot of mistakes in the last fight but I’m confident I corrected them. A big difference in this fight is that it is not in Puerto Rico like our first one, this one’s at a neutral site the United States. Whether it’s a decision or a knockout, I’m coming to win.”

“Oquendo is a great, tough fighter but I am ready to take him on. I expect this to be a great fight on Saturday and I will leave everything in the ring. This is going to be a hard fight. I’m coming here to win.”

“Jhonny Gonzalez is a champion of the world. We know he’s a powerful, dangerous fighter. But I’m here to fight and give my daughter a gift on Saturday. But this fight is for all the fans of Mexico and Puerto Rico.”

BRADLEY VS RIOS IS ON! OFFICIAL ANNOUNCEMENT COMING NEXT WEEK!