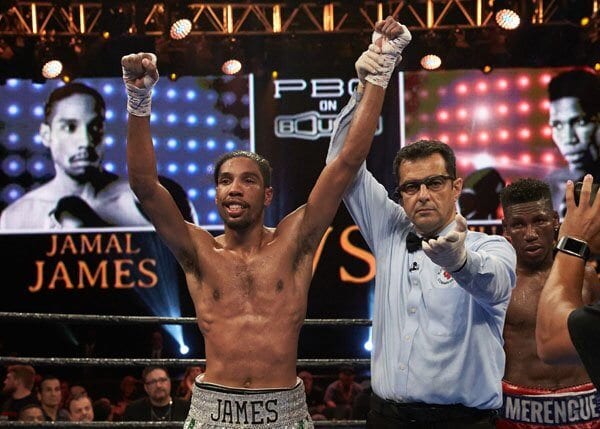 Despite a bizarre fight week that saw Caleb Truax pulled from headlining the card due to a failed physical, welterweight prospect Jamal James (18-0, 9 KOs) scored a spirited ten round unanimous decision over Juan Carlos “Merengue” Abreu (18-2, 17 KOs) on Friday night at Full Sail Live at Full Sail University in Winter Park, Florida. It was a competitive fight, Abreu dropped James in round four nearly stopping him. James would then give his receipt knocking downAbreu in round six, after that knockdown Abreu appeared content to just survive to not get stopped. The judges saw the bout 97-91, 96-92, 96-92.

Super welterweight Erickson “The Hammer” Lubin (12-0, 9 KOs) continues to impress as he scored a sixth round stoppage against game veteran Orlando Lora (31-6-3, 19 KOs). Lubin was credited with a knockdown when he knocked Lora into the ropes in round two, but it was a flurry of punches that forced the referee’s hand ending the fight in the sixth round.

In the fight of the night, super welterweight “Silky” Wilky Campfort (21-1, 12 KOs) scored a spectacular third round KO over Ronaldo “Salvaje” Montes (16-3, 14 KOs). Campfort recovered from a first round knockdown to drop Montes three times in round two. Campfort was most notable for fight week calling out Austin Trout (to Trout’s face) as he explains he wants Trout next.