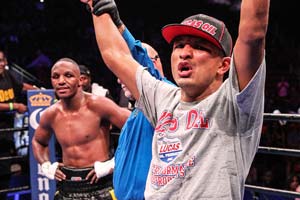 Oh how the mighty have fallen. Welterweight Devon Alexander (26-4, 14 KOs) was once in the running to land a Floyd Mayweather fight in 2012, but now is on the losing end of decision on an ESPN card that took place in the middle of the week. Alexander who fought welterweight Aron Martinez (20-4-1, 4 KOs), who recently fought Robert Guerrero in a close fight, but prior had had a very pedestrian record upset the former welterweight star. Alexander controlled the action early, but appeared frustrated after the four round as he was unable to keep Martinez off him and the clinches were not keeping Martinez at distance. The judges  scored the bout 96-94, 97-93, 97-93.

In the co-main event IBF featherweight champion Lee Selby (22-1, 8 KOs) cruised to a sleepy twelve round unanimous decision over 36-year-old former three-division titleholder Fernando Montiel (54-5-2, 39 KOs). Selby dwarfed the much smaller Montiel, who had previously won titles at flyweight, super flyweight and bantamweight, but appeared to be dramatically smaller than Montiel. The judges had the bout 119-109, 118-110, 116-112.