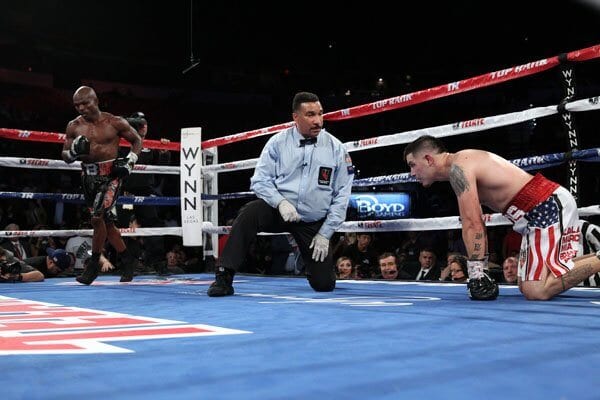 WBO welterweight champion Timothy Bradley (33-1-1, 13 KOs) forced Brandon Rios (33-3-1, 24 KOs) to say “no mas” on Saturday night at the Thomas and Mack Center in Las Vegas after nine hard rounds of taking blows to the belly, which Rios could not with stand. The narrative of the fight was based around Bradley leaving Joel Diaz prior to the fight for ESPN Boxing personality, Teddy Atlas. Bradley seemed to have looked much improved despite the short time with Atlas as Bradley was turning over punches and seemed to be looking crisper in terms of power and accuracy. After the bout, Brandon Rios retired.

WBO featherweight champion Vasyl Lomachenko (5-1, 3 KOs) scored a tenth round KO over a unknown Romulo Koasicha (25-5, 15 KOs) in the HBO-televised opener on Saturday night at the Thomas and Mack Center in Las Vegas.  Lomachenko did what was asked of him, but not much more leaving some feeling a bit let down as this marks the third unknown commodity Lomachenko has fought since defeating Gary Russell Jr. to win the belt.