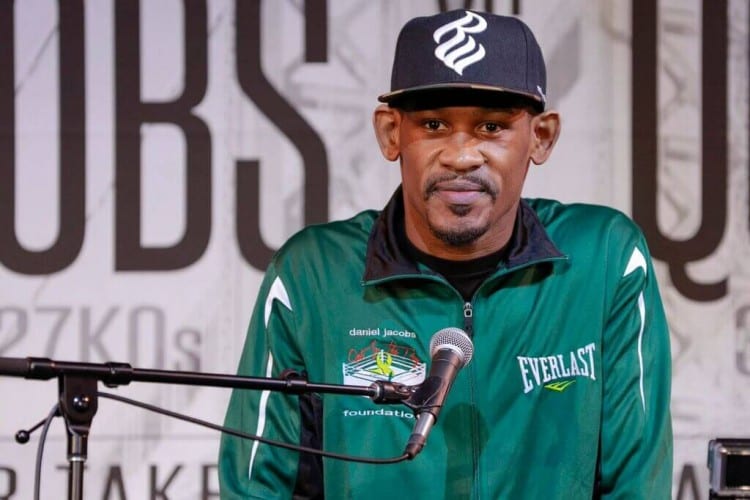 In the main event of a Showtime-televised card from the Barclays Center in Brooklyn, WBA middleweight title-holder Daniel Jacobs (31-1, 28 KOs) blew out former world title holder Peter Quillin(32-1-1, 23 KOs) in just 85 seconds into the first round. In a wild minute and a half of action both Quillin and Jacobs threw caution to the wind as they threw punches in the middle of the ring. Quillin backed into the ropes and the two started exchanging hooks, seconds later an overhand right by Jacobs landed flush on Quillin who stumbled across the ring , but never went down. Quillin’s legs looked on steady and the referee waived it off, some on press row felt the fight was stopped pre-mature, but Quillin didn’t object to the stoppage.

After the bout, Jacobs said “…“It’s bittersweet. I’m just grateful that I’m able to prove the doubters wrong. Boxing is always about proving yourself and I think with tonight’s victory, that’s what we did. We have techniques in the gym that we work on that’s called ‘rumble,’ so when we have guys hurt we know exactly what punches to put together, what to bombard a guy with and corral a guy with and get the stoppage.” Jacobs would go on to say that he is interested in the winner of Andy Lee versus Billy Joe Saunders.

In the final fight of the night of the Showtime telecast female super featherweight Heather Hardy (15-0 3KOs) won a decision an eight-round unanimous decision win against Noemi Bosques (10-4-2). The judges heavily favored Hardy with the scores of 80-72 x2 and 79-73, all for Hardy, now 15-0 with 3 KO’s. This was a rematch of their bout earlier in the year in which Hardy won a split decision, Hardy also weighed in five pounds heavier than Bosques which was never clarified to ITRBoxing.com.

Welterweight Chris Algieri won a tough ten round decision over Erick Bone. Algieri showed off his newly found power which he credits to new trainer John David Jackson as he knocked down Bone in the 8th round in order to earn a dominant win.  95-The judges scored 95-94, 97-92 and 97-92 all to Chris Algieri all for Algieri, ITRBoxing had te bout

Marcus Browne stopped Francisco Sierra for a fourth round technical knockout victory on the undercard. Light heavyweight Joe Smith decisioned Will Rosinsky with the scores of 98-92, 97-93 and 96-94. Former junior middleweight champ Yuri Forman returned to the ring by defeating Lenwod Dozier in a fairly close bout that was scored 77-75 on all three cards. 130-pound Titus Williams got up from a first round knockdown to earn a six-round decision win over Emmanuel Castro Williams with the odd scores of 60-54, 60-53 and 59-54. Cruiserweight Luis Garcia knocked out Willie Williams in the first round in a fight that was one-sided from the get-go. The opening bout saw welterweight John Hernandez defeat John Grady by unanimous decision.

Ramirez, Vences win in front 13,000 plus in Fresno