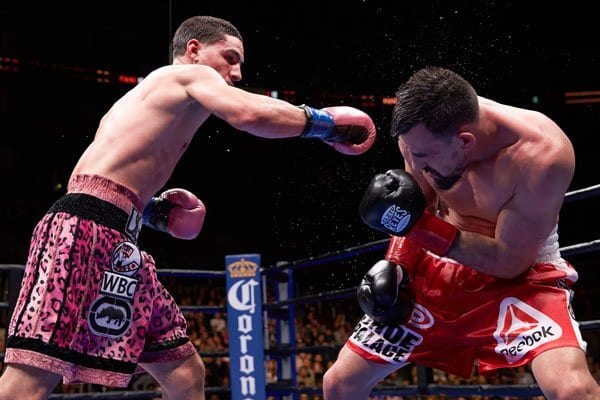 Garcia, a heavy favorite coming into the fight looked unsettled by Guerrero early in the fight losing the first five rounds on my card based off Guerrero’s activity controlled the action with a higher work rate and closing distance. Garcia did something he doesn’t often do, which is he made an adjustment as he began to time Guerrero coming in with his straight right hand. The two engaged in a close back and forth fight that was all action until the last bell.

Sammy “The Who Can Mexican” Vasquez (21-0, 15 KOs) of Pittsburgh scored a sixth round stoppage over East L.A.’s Aron Martinez (20-5-1, 4 KOs). Vasquez outworked Martinez, who couldn’t cut off the ring let alone land a hard punch. Martinez did not come out for round seven which awarded Martinez the victory for the fight.

In the opening bout, Amir “Hardcore” Mansour, (22-2-1, 16 KOs) was unable to continue after round five after having a broken jaw due to U.S. Olympian Dominic Breazeale, (17-0, 15 KOs), who pulled off the victory. Breazeale was unable to mount offense early, but Mansour appeared to gas after knocking Breazeale down in the third round. Mansour began to slow down and Breazeale capitalized by fully extending on his punches which lead to Mansour not answering the bell