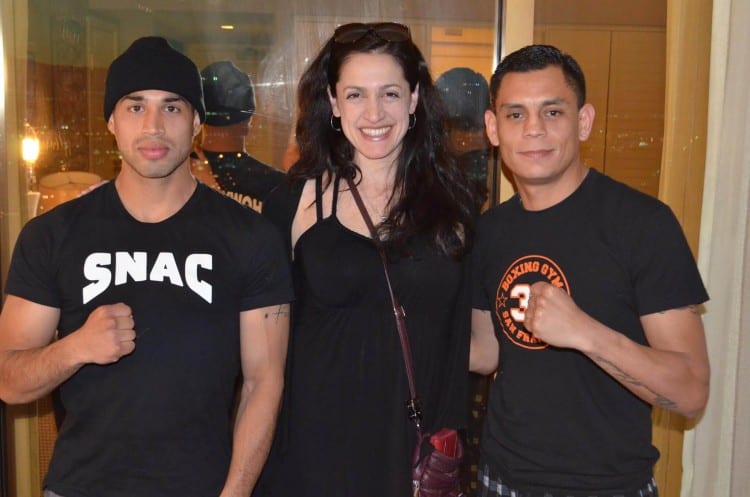 Oakland, CA – In front of a sold-out crowd in Oakland, CA at the Oakland Marriott Civic Center, Jonathan ” El Carismatico” Chicas (14-2 7KOs) of San Francisco, CA stopped Bilal “Rebellious” Mahasin (7-3-1 1KO) in the fifth round of the main event on top of a stacked card that kicked off action in the Bay Area. Mahasin, who was the aggressor to start the fight pushed the pace for the first three rounds, but a slight shift in momentum occurred in the fourth round when Chicas’ hand speed began to catch up to Mahasin. In the fifth round, Chicas came over top of a Mahasin jab with a right hand that rocked Mahasin to the ropes.

Mahasin, who still seemed able to fight was in the corner covering up when a flurry of unanswered punches from Chicas which had the referee step in to call a halt to the fight. Chicas, who is also the BKB champion earned one of his biggest career wins to date in a grudge match between two high level fighters in the Bay Area.

Some pundits ringside thought the bout should of continued and Mahasin be afforded a standing-eight, leading to speculation that a rematch between the two might be in the future. Nonetheless, this was the biggest win of Chicas’ career in his opponents hometown.

Ricardo Pinell (13-2-1 6KOs) of San Francisco, CA won a one-sided decision over Arturo Crespin (12-5-1) of New Mexico in a six round decision. Pinell who was on his way to stopping Crespin suffered a bad head butt at the end of the third round that seemed to slow down Pinell a bit as Crespin pushed Pinell back a bit taunting him by dropping his hands and eating straight punches. Pinell landed the cleaner punches and dominated the majority of each round.

O.T. “The Champ” Seymore (5-0 5KOs) continued his knockout streak which now is up to five in a row as he knocked out a game Jonathan Aceves (1-2) in the third of a competitive bout that Seymore was clearly dominating.

Former UFC and WEC heavyweight mixed martial artist Mike Kyle (1-0 1KO) made his pro boxing debut by knocking out James Kirby (0-1) of Fresno, CA. After the bout, Kyle stated that he is looking to go the top and wants Deontay Wilder eventually.

In a hard fought bout, Brandon Dino Adams (4-3 2KOs) of 3rd St Boxing Gym in San Francisco outpointed a game Eddie Diaz (1-4) in a competitive affair. The bout saw Adams working off his back foot and catching Diaz coming in as well as Diaz applying pressure that would frustrate Adams. Diaz hit Adams multiple times low, so much so that after the bout Adams commented that he didn’t feel like himself, because of the pain he suffered.

Darren Mallard (3-1-1) of Sacramento, CA decisioned Chad McKinney (1-5) in a competitive, close fight. Mallard struggled to keep distance at times allowing McKinney to get on the inside and land clean punches. Mallard, the more technical of the two found a way to pull off the victory edging a four round decision.Richard Stachowski (1-0 1KO) knocked out Juan Cabrera (0-1) in less than one minute in a sensational knockout. In the opening bout Andres Salas (1-0) of Ring of Fire Boxing in San Francisco, CA knocked out Cody Sons (0-1).

In between the undercard and main event, singer/songwriter Adrian Marcel of Oakland, CA performed a fifteen minute set including his single “2 AM”.