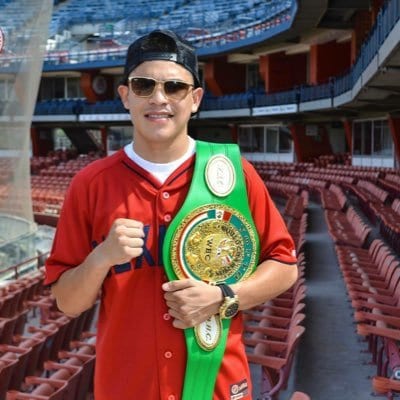 In front of a sold-out crowd in downtown Los Angeles, CA at the Bellasco Theater Diego De La Hoya (14-0 8KOs) once again lived up to his last name despite facing less than stellar opposition.  De La Hoya easily dispatched of Arturo Badillo (21-10 19KOs) as he was far too much for the game veteran who was forced to bow out of the fight in the fourth round due to a body.

In the opening bout on Estrella TV,  Nick Arce (7-0 6KOs)  won a six round decision over Luis Lizarraga Jr (5-8-1 2KOs). The judges saw the bout 60-54, 59-55 to times for Arce. This was the first fight of Arce’s that saw the final bell as all of his bout until this fight had been stopped before time expired.

Super lightweight Oscar Duarte (4-0-1 2KOs) of Parral, Mexico won a unanimous decision over Archie Weah (1-5) of Georgia in a scheduled four rounder. Duarte dropped Weah in the second round so hard his mouthpiece flew an amazing distance as Weah hit the canvas. The final scores were 40-35, 40-35, and 39-36.