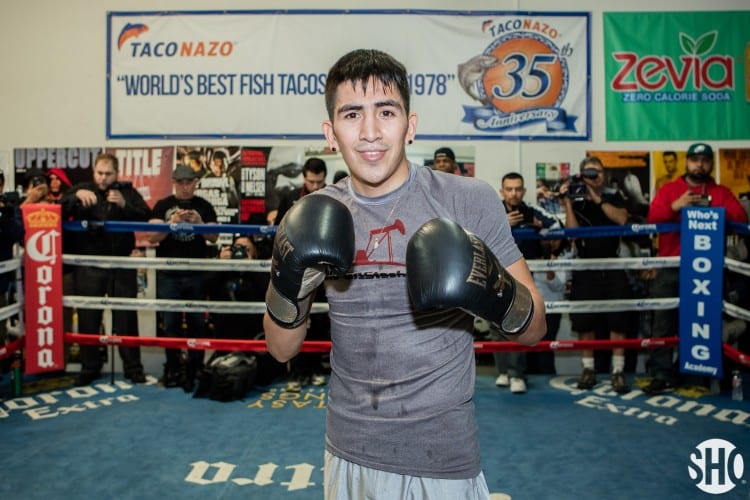 Undefeated featherweight world champion Leo “El Terremoto” Santa Cruz held an open media workout Thursday at Who’s Next Boxing Academy in La Puente, Calif., as he prepares for his first title defense against Kiko “Sensación” Martinez Saturday, February 27 live on SHOWTIME from Honda Center in Anaheim, Calif. Santa Cruz vs. Martinez headlines a SHOWTIME CHAMPIONSHIP BOXING® tripleheader that features Mexican warriors Julio Ceja and Hugo Ruiz meeting in an awaited super bantamweight world title rematch plus heavyweights Gerald “El Gallo Negro” Washington and Oscar “Kaboom” Rivas will put their unblemished records on the line in a 10-round matchup. The action begins at 10 p.m. ET/7 p.m. PT. Tickets for the live event, which is promoted by TGB Promotions, are priced at $27, $54, $104 and $199 and are on sale now via ticketmaster.com, Ticketmaster retail locations or by calling 800-745-3000. Tickets are also available at the Honda Center Box Office.

Santa Cruz worked out alongside his father and trainer, Jose Santa Cruz, for the media in attendance and spoke about his upcoming bout and more. The workout also featured a surprise performance from Martin Castillo and a five-piece band that included a tuba and an accordion. Santa Cruz jumped rope and went through drills while traditional Mexican folk music called Corrido filled the Southern California gym. Here is what Santa Cruz and his father had to say Thursday:

“I always train to make a statement. I want to go out there and show everyone that I’m really good and I deserve to be considered one of the best.

“I fight for my family. Since I was small, this is what I’ve wanted to do to help my family. I wanted to work hard and give my family a better future.

“Martinez is a strong fighter who comes forward and always puts pressure on you. He never backs down and always comes to fight. That’s what we like about this matchup — it makes for a more intense fight.

“I think he’s going to be the aggressor because he’s shorter and has to fight that way. But I’m going to go forward and be the aggressor too. If that’s not working, I’ll box him. We’re going to do what we need to do to win the fight.

“I see Carl Frampton vs. Scott Quigg as a 50-50 fight. It’s a tough fight for both of them. I think whoever catches the other guy first will get the victory. They both can hit and they both have great skills. It could go either way.

“It’s a very interesting fight between Frampton and Quigg. They’ve both been possible opponents for me and I hope that I do well that night and face the winner of that fight. I don’t care who it is, I want to fight them.

“I’m willing to fight whoever. I want the winner of Frampton-Quigg. If not then Lee Selby, Gary Russell Jr., Jesus Cuellar or anyone in the division. Hopefully next it will be one of those fighters.

“My fighting style is to always go forward and throw a lot of punches. I just want to entertain the fans. I fight for them and I try to send them home happy. I want to go in there and fight in a war.

“I’m going to fight all of the top guys. I’m still young and I know if I keep working hard and taking care of the guy in front of me, I’ll get all of those fights.

“We’re working on our distance and learning new things every day in camp. I don’t want to change too much, since I’m undefeated. I’m going to be prepared mentally and physically to get the win.

“We’re working hard all the time. We know what we have to do in the ring to win the fight. My last fight our strategy was to brawl but we adjusted it and moved more and we were able to get the victory.

On his recent foray into boxing promotion:

“Being a promoter is difficult. It’s very hard. You’re always busy, so right now I’m focused on my boxing career. I’m letting my brothers and my family take care of it now. I’m not there 100 percent yet but I like to give my opinion. It’s something I’d like to do after I retire.”