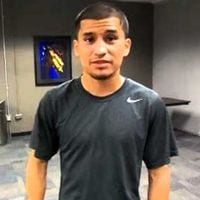 Super bantamweights, Adam “Mantequilla” Lopez (15-0, 7 KOs) kept his unblemished record intact as he earned a ten round unanimous decision over Mario “Yayo” Muñoz (16-1-1, 10 KOs) on Friday night at the Adrian Phillips Ballroom inside of historic Boardwalk Hall in Atlantic City, NJ.The judges scored the bout 97-93, 98-92, 98-92 all for Lopez.

Lightweight O’Shaquie “Ice Water” Foster (10-1, 7 KOs) scored an upset seventh round TKO over previously unbeaten Lavisas “Red” Williams (8-1-1, 3 KOs). Foster dropped Williams at the end of round two and followed it up with knockdowns in the rounds three and four. Williams’ corner stopped the bout mercifully after seeing there fighter hit the canvas again in the seventh round in which they threw the towel in.