Santa Cruz stops Martinez in Fight of the Year contender 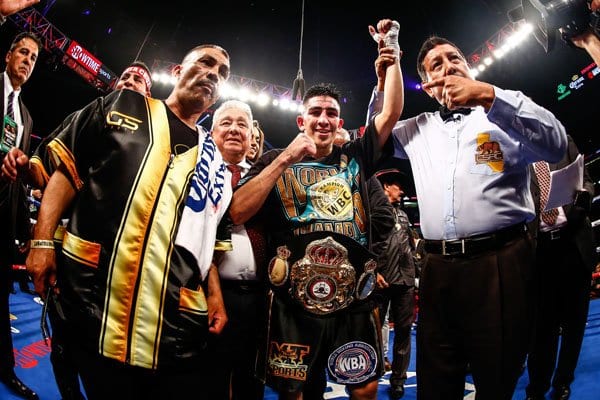 WBA featherweight world champion Leo Santa Cruz (32-0-1, 18 KOs) scored a fifth round TKO over former world champion Kiko  Martinez (35-7, 26 KOs) on Saturday night at the Honda Center in Anaheim, California. Santa Cruz dropped Martinez twice in round one, but may have been dropped himself in the second round, though officially ruled a slip.

The two engaged in a firefight that saw Martinez slightly outgunned as Santa Cruz stopped Martinez as he lay on the ropes in fifth round at 2:09 of the fifth round.

Super bantamweight Hugo Ruiz (36-3, 32 KOs) needed just 51 seconds to dethrone WBC world champion Julio Ceja (30-2, 27 KOs) on Saturday night at the Honda Center in Anaheim, California. Ruiz dropped Ceja in round one with a right hand, then got a referee’s stoppage with his follow-up barrage. Ceja seemed to suffer an ankle injury when he was knocked down. The win sets up an all, but for certain trilogy between the two who have traded wins

Santa Cruz stops Martinez in Fight of the Year contender