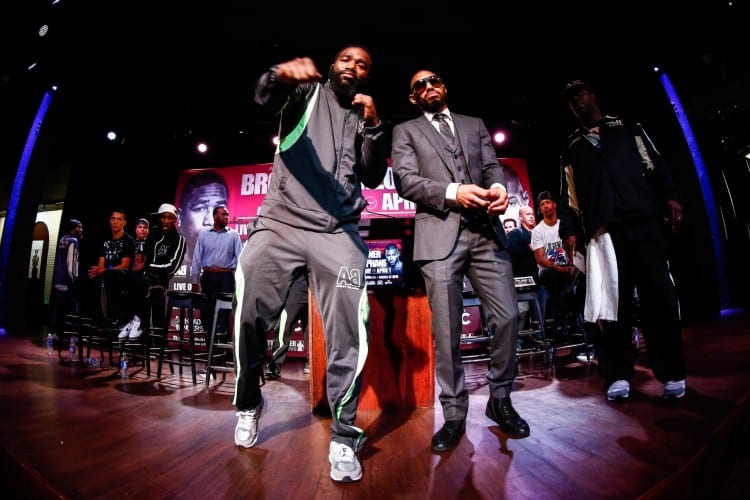 Four-division world champion Adrien “The Problem” Broner and 140- pound contender Ashley “The Treasure” Theophane went face-to-face Wednesday for the first time since their heated press conference in February as they near their Premier Boxing Champions on Spike world title showdown taking place Friday, April 1 at the DC Armory in Washington, D.C.

Also in attendance Wednesday was unbeaten rising star Robert Easter Jr. and his opponent, former world champion Algenis Mendez, who meet in a 10-round lightweight battle, plus rising undefeated prospect Gervonta “The One” Davis and his opponent, Mexico’s Guillermo Avila, who discussed their 10-round super featherweight battle that opens PBC on Spike coverage at 9 p.m. ET/8 p.m. CT.

Tickets for the live event, which is promoted by About Billions Promotions and Mayweather Promotions in association with HeadBangers Promotions, are priced at $200, $100, $50 and $25, and are on sale now. To purchase tickets visitwww.ticketmaster.com, Ticketmaster locations or call (800) 745-3000.

“Anything is tough when you have a lot of things coming your way. I have tunnel vision. It’s fight time. I’m locked-in until I get the job done.”

“Right now I have to focus on this fight. I’m keeping my mind in the right state. I’m not just doing this for me. It’s for my family. It’s bigger than just me”

“The relationship that me and Floyd have, it is obvious that we wear our feelings on our sleeves, anything we say about each other, we don’t care who hears it. At the end of the day it doesn’t affect anything.”

“Friday night is going to be a big night. I’m going to keep my promise. I will stop Ashley Theophane. I don’t care which round it is, but I will stop this man.”

“This is a big night for my little brother and protégé, Robert Easter Jr. He doesn things that amaze me. I know what he’s capable of. I’m happy for him to get this chance against a former world champion. It’s going to be a heated matchup. This whole card is stacked from the top to the bottom”

“It’s been a journey. But we’re here now. Just two days away.We’ve got two days and then the champ and me are going to go to war.”

“I’m here to make this happen. Broner can play games, it’s all good. I’m here on a mission.”

“I’m ready. We’re so close and I really just can’t wait to hear that bell.”

“I want this man to live up to his words that he’s going to stop me before round four. Because that means he will be standing and fighting instead of running around the ring.”

“A win means everything to me. It changes my life. This is my boyhood dream. This could lead me to all the other big names.”

“He’s a former world champion and a big test for me. I feel like I’m supposed to be here. He has a big head, so I’m not planning on missing at all. It’s going to be a short fight. I hope he’s prepared to go to sleep.”

“I know it’s a big step up. I just hope he’s trained hard for this one. I’m aiming to stop him. Most of my fights are short and that’s what I’m looking for”

“My whole team has pushed me so hard for this fight. This is going to be a quick fight. He’s going ‘night night.'”

“Robert Easter has not faced the same kind of competition that I have. I’m very confident heading into this fight. I was very happy when I got the call about this fight.”

“This is going to be the kind of fight that the fans will really enjoy. We wish Easter well and I hope everyone is ready for Friday night.”

“I don’t want to rush in there. That’s how you lose. We’re going to work out jab. Go in and out and execute a game plan.”

“It means a lot to fight at the DC Armory because I had my first professional fight there. I’m looking forward to getting in the ring again.”