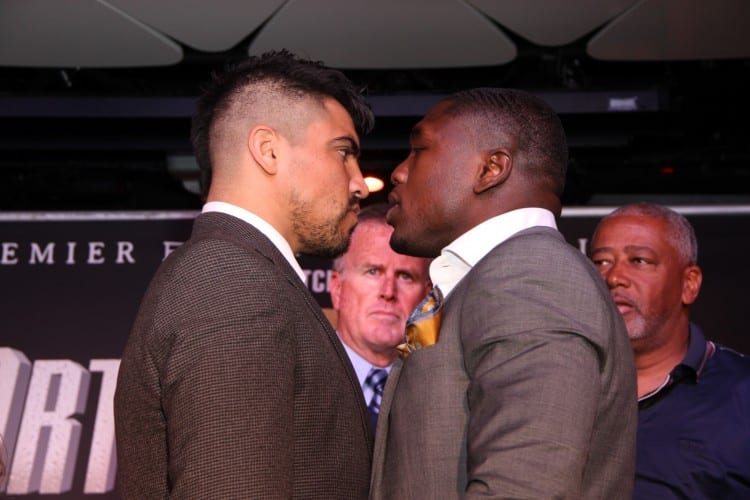 Tickets for the live event, which is promoted by TGB Promotions, are priced at $209, $105, $53 and $27, plus applicable taxes, fees and service charges, and are on sale now and available for purchase online at AXS.com.

The fighters held court at the Conga Room at L.A. Live and spoke about their respective matchups. Ortiz and Berto will tangle in a highly anticipated rematch of their 2011 battle, won by Ortiz, while the rising Lara and former champion Montiel meet in a crossroads fight that could launch the winner into title contention in a stacked featherweight division.

“Everyone said I was a ‘tomato can’ who had no business being in the ring with Berto the first time. I had to go to Connecticut to get my belt and my respect.”

“I’ve fought a lot of wars. I’ve been in battles. I broke my jaw and my wrist, that’s three years right there. But my will to fight led me back. The more boxing I watched, the more upset it made me. I don’t think the other welterweights are on my level”

“Berto blames me for his downward spiral. He thinks he has a chance this time. Always a good dream to have.”

“I’m not going the distance this time. I’m going in 100 miles per hour, full throttle.”

“2011 was one heck of a year. The repeat is coming on April 30 because I want another world championship. Berto is a tremendous warrior; I’ll give him that. I’ll be ready and I know he will be too.”

“The fight back in 2011, he got me. He did what he had to do to win. But this time I’m going in extremely focused and ready to take everything that I felt he took from me that night.”

“I went to school. I failed the test and now I have the chance to ace it. ”

“My power and speed are still there. I’m glad this fight came about because it’s going to be a great night for the fans.”

“I’ve got to show Victor some respect because he beat me the first time. I’m big on being respectful. I respect Victor and the history of Mexican fighters, they put their blood, sweat and tears in there.”

“This is what he asked for. So I want to make sure he knows what he’s getting himself into. This isn’t the same situation as last time. So we’ll see it in the ring. Come out on April 30 and see me handle this business.”

“I know this isn’t going to be an easy fight. Montiel is a very accomplished fighter and that’s why we’re preparing ourselves very diligently for this fight. We’re looking forward to the challenge that he presents.”

“I have all the respect in the world for Fernando Montiel. He was a great world champion who is very established in his career. I must be at my best to get the victory”

“I know that Jorge Lara is a very good fighter, he’s aggressive. I know if I make a mistake it could be a long night for me.”

“I know I have to rely on my experience to come out victorious. I expect both of us to battle. There could be some knockdowns. It’s going to be a fun fight for the fans.