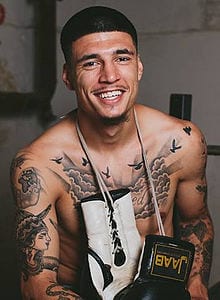 Roc Nation Sports has announced that one of their biggest prospects will be taking a major step up as welterweight Dusty Hernandez-Harrison (29-0, 16 KOs) of Washington, D.C. will return to the ring on Friday, May 13 when he takes on Mike “The Silent Assassin” Dallas Jr. (21-3-1, 10 KOs) in a 10-round bout at the DC Armory in Washington, D.C.

Harrison has faced a slew of fighters with none of which being that known to the common boxing fan. Dallas Jr. on the other hand has been in with the highest level of competition , but lost when stepping up most memorably to Lucas Matthysse.

The fight will be televised live on BET beginning at 10:00 p.m. ET and on tape delay for the west coast.