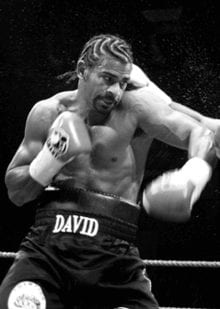 After huge public demand, former two-time world heavyweight champion Shannon Briggs has been confirmed to fight at Haye Day on May 21 at The O2, with the view to a battle David Haye later in the year if they are both victorious.

“I used to find Briggs funny, chasing Klitschko around the world and constantly harassing him, but when it started happening to me, it truly isn’t anything to laugh at. The fact he came unannounced to London banging down my gym door, scaring my secretary half to death shows he needs to be taught a serious lesson about respect!

“The public wants to see the fight, so they convinced me to add him to my undercard. If that chump can beat somebody, then I will fight him after. I’m going to put an end to the ‘let’s go champ’ movement and change it to ‘let’s go chump’ – because that’s all he is, an old chump who goes round screaming, shouting and bothering people.

“I’m not just going to fight him, I’m going to knock him out. He can take a lot of punishment and is a bit of a tough guy, but let’s he how long he can stay standing when I start to rain down Hayemakers on his big head! That Chump is going to regret ever taking that flight to Heathrow to start harassing me!”

“I want that! I took the MRI, he’s scared. He’s scared of me. I’m the champ and he’s the chump. Your comeback is going to be cut short by the champ. Last week I met with his lawyers and we shook on a deal. Everybody got to see for themselves that he’s a scared man.”

Tickets to Haye Day at The O2 on May 21 are available on general sale now via www.theo2.co.uk.