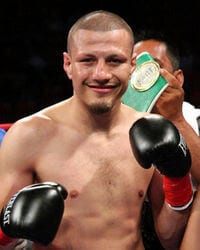 In a crossroads fights between two fighters who have slightly overachieved , but are somewhat directionless at the present moment, Jesus Soto Karass (28-10-3, 18 KOs) and Yoshihiro Kamegai (26-3-1, 23 KOs) will do battle this Friday at the Belasco Theater in downtown Los Angeles.

Not unlike most of the shows put on at the venue, the card Golden Boy Promotions card is sold-out with U.S. television distribution being split between Estrella TV and RingTVLive.com (online w/ English commentary).

The card will also feature Vyacheslav Shabranskyy (15-0 12KOs) coming a game majority decision win over Yunieski Gonzalez, the man many feel beat Jean Pascal and getting off the canvas to beat Paul Parker, will do battle with a shop worn veteran middleweight Derek Findley (23-18-1 15KOs) who is moving up three weight class to fight in a cruiserweight bout in the co-main event.

Tim Bradley uncertain about return to ring after Pacquiao fight