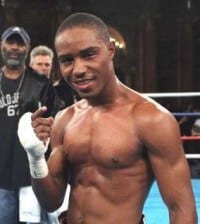 Eric Hunter is looking to overturn his loss to Lee Selby that happened last weekend at The 02 Arena per Sky Sports. Hunter was outclassed after dropping Selby earlier in the fight , but was deducted a point thanks in part to Hunter low blow in the seventh round.

The protest should be fairly pointless, but is news worthy since it could see Hunter back in the top ten of the IBF (the division in which Hunter filed protest with).

“Being honest with you, I thought I was going to knock him out. Something has got to happen, they are going to have to fix this up. I’m trying to get a rematch, but I would like it to be in the States.” said to Sky Sports reporter Richard Damerell.

Hunter has been disqualified two times prior in his career and nearly was in this bout as well. A rule on what the IBF should come out sometime soon and more than likely will have no impact on anything.