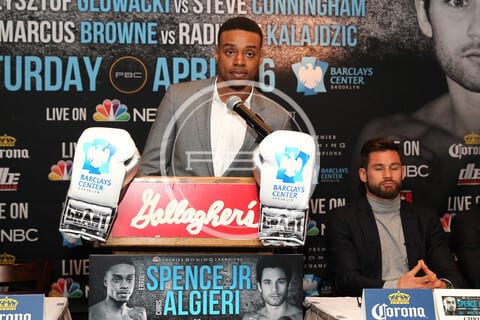 Undefeated rising stars Errol “The Truth” Spence Jr. and “Sir” Marcus Browne started out as teammates on the 2012 U.S. Olympic team and will face the toughest tests of their careers when they enter the ring in primetime on Premier Boxing Champions on NBC Saturday, April 16 from Barclays Center in Brooklyn.

Tickets for the live event, which is promoted by DiBella Entertainment in association with Star Boxing, start at $25, not including applicable fees, and are on sale now. Tickets can be purchased online by visiting www.ticketmaster.com, www.barclayscenter.com or by calling 1-800-745-3000. Tickets are also available at the American Express Box Office at Barclays Center. Group discounts are available by calling 844-BKLYN-GP

With the 2016 Summer Olympics in Rio nearing the opening ceremonies, it is poetic that both Spence Jr. and Browne will have the opportunity to launch themselves into the upper echelon of the sport as a new generation of rising stars get set to test themselves against the best in the world at the Olympics.

“My pro debut was on the ‘Night of the Olympians’ and it had me, Terrell Gausha, Marcus Browne, and Rau’Shee Warren. These are the kind of nights we envisioned. It’s so great to see my friends and Olympic brothers doing as well as me.”

“My favorite memory is competing and being around all of the great athletes. I got to meet Kobe Bryant, LeBron James, Carmelo Anthony, Serena Williams and Michael Phelps. All of these athletes that I had seen on TV. Being in that atmosphere helped me realize that I am a great athlete amongst other great athletes.”

“The Olympic stage prepares you for anything. It’s the biggest tournament in the world. Having media day and talking to all of those outlets and then having to train, it prepares you for the professional ranks. When you get to the top, you’re going to have to do those exact same things.”

“Marcus was always the loud one in the Olympic training center. Marcus was always encouraging everyone to work hard and train harder. I want to be like Evander Holyfield. He and his Olympic teammates like Pernell Whitaker all held belts at the same time.”

“I would tell the 2016 team to just keep doing what they’re doing. Stay focused. Don’t get too big headed. Listen to your coaches and do everything you’ve been doing. The Olympics are right around the corner and we want to see medals in the men’s division this year.”

“We always thought about nights like these where we’re both center stage. This couldn’t have happened if we didn’t keep our records clean and fought hard. To have gotten to this point alongside an Olympic teammate is an amazing thing. I look forward to both of us being propelled to the next level.”

“It sounds materialistic, but all the free gear we got was amazing. Coming where I come from, I had never been given anything like that before. I was surprised at the adoration I was getting from people. Everyone just wanted to make us feel a part of this unbelievable event.”

“Fighting in front of 10,000 people that are cheering against you will prepare you for anything in this sports. A lot of people don’t get that until they’re at the highest level. The atmosphere is just so intense and the Olympic fans are so passionate.”

“There is always going to be that bond of brotherhood regardless if you talk everyday or every three years. Spending every waking moment with these guys and singing the ‘Star Spangled Banner’ every morning, we build up a group bond and individual friendships that are so important to us

“Errol and I are kind of opposites. Errol is more of a quiet and reserved guy. He works hard and runs like a gazelle. He fights hard and at the end of the day he is just a good dude. The plan is for all of us to be world champions and do great things”