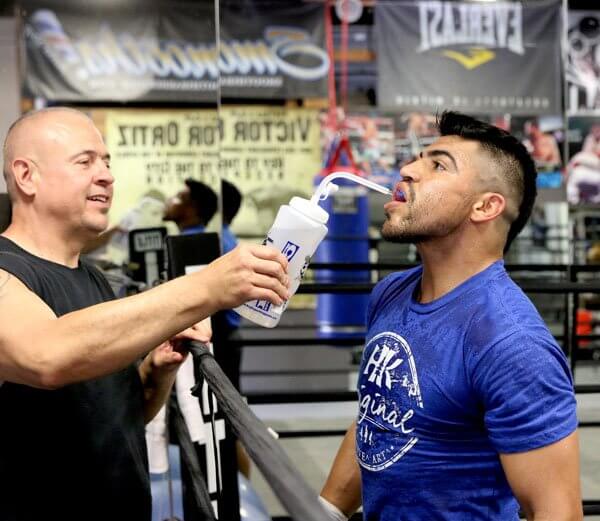 Former world champion “Vicious” Victor Ortiz held a media workout in Los Angeles Thursday and shared thoughts on his upcoming primetime rematch with former champion Andre “The Beast” Berto on Saturday, April 30 on FOX from StubHub Center in Carson, Calif. Ortiz and Berto will square-off in a rematch of their 2011 Fight of the Year in which both men hit the canvas.

On his first bout against Berto:

“I made a lot of mistakes that night but I did enough to get the victory. I always said if I ever got the rematch, I would end him and now I have the chance. Berto had an off night. I wasn’t at my best either, but I destroyed him regardless. This time we’ll both be at our best.

“We’ve both had some wars since our first fight, but if you can’t back it up, you should just stop.

“I had injuries heading into the last fight, but now you have two guys who are 100 percent. That is going to make for an even better fight this time around.”

On the rematch with Berto:

“Berto comes to fight. He comes for war and wont give up ever, but that makes two of us.

“We have been through a lot in the last five years. He hates me. I have no hate in my heart, but I know it’s a sport. I’m not leaving that ring without a victory.

“Berto wants to hurt me just as bad as I want to hurt him. I’m ready to go again. This is going to be a Fight of the Year for sure.

“Anytime you have to convince yourself that you’re going to beat me. That you actually had a chance the first time, there’s a lot wrong with you.

“It’s a sport. It’s not personal. Two guys going back and forth. I want to rip his head off and he wants to rip my head off. Its nothing personal. We can go get a burger after the fight.

“I would hate someone that took my undefeated record. So maybe he hates me, but I don’t hate him. Whatever his mindset is, April 30 is right around the corner and I’m ready.”

“Coach Hoss has always been there 100 percent. He has been in my corner about a decade and he knows the game better than a lot of the people I’ve worked with. Every fighter needs to find a ‘zen’ with their coach and I have that with Coach Hoss.

“I feel like this is the best fit for me. Hoss has been with me through it all, from being dropped, to the hospital and everything. He always says that this is just another way to make you stronger.

“I also have coach David Rodela in my corner. We were once upon a time rivals and now we are closest of friends. It is a true ‘Grudge Match’ right there. Now he just tortures me in training.

On his acting career:

“At this point I have one focus. For the next three or four years I am going to be 100 percent focused on boxing.

“I’ve had big celebrities and actors come up to me and say ‘you’re Victor Ortiz, can we take a picture?’ It’s mutual respect, but it’s also kind of crazy. I don’t overstep my boundaries.

“I don’t watch the movie I’ve been in. That is too much. Some people like to see themselves on the screen, I’m not one of those people.

On his positive attitude:

“I believe that if you’re a bad person, bad things happen. I’m a hard worker. I used to work construction and out in the fields. I never complained. Always smiled.

“I wake up in the morning with a smile on my face. People take some things too seriously. Of course there are haters out there, but I don’t pay attention to any of that. I’ve found that a good positive attitude goes a long way.

“It doesn’t matter what people say. What matters what I want, what I’m going to do. April 30 is going to be the rebirth of me.”

On what’s next after April 30:

“I’m ready to fight for a world title. Especially after this victory that’s coming. This is for personal satisfaction. Berto has been talking for five years and I’m ready to go.

“I took a different route, a different approach. Why? Because I wanted to try other things. Do I have to be here? No. I turned down two movies to be here. Boxing is my first and true love.

“I’m ready to conquer the 147 and 154 pound divisions and Andre Berto is standing in my way right now.”