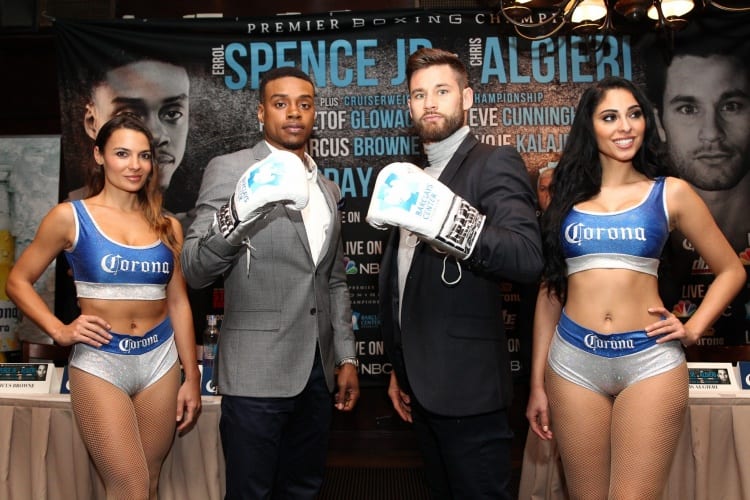 2012 U.S. Olympian welterweight Errol “The Truth” Spence Jr. (20-0, 17 KOs) took a big step in competition as he scored an stopped former world champion Chris Algieri (21-3, 8 KOs) on Saturday night at Barclays Center in Brooklyn, NY. Spence never allowed Algieri to work at distance as he smothered him from pillar to post eventually dropping him in the fourth and eventually stopping him in the fifth. The win makes Spence Jr. the mandatory contender for Kell Brook’s IBF welterweight title.

Unbeaten WBO cruiserweight champion Krzysztof “Head” Glowacki (26-0, 16 KOs) made his first title defense with twelve round unanimous decision over Steve “U.S.S.” Cunningham (28-8, 13 KOs). Glowacki sent Cunningham to the floor twice in round two only for Cunningham to battle back to his feet and put together a gutty performance. Glowacki would send Cunningham to canvas again in round ten as well as the final round. The judges scored the bout 116-108, 115-109, 115-109 all for Glowacki.

In a light heavyweight swing bout, 2012 U.S. Olympian and hometown favorite “Sir” Marcus Browne (18-0, 13 KOs) stole a victory  over Radivoje “Hot Rod” Kalajdzic (21-1, 14 KOs), with whom he appeared to have lost to. Browne was credited with a generous call of a  knockdown after a Kalajdzic slip. Kalajdzic would then badly hurt Browne in the sixth round that sent him to ground and nearly had him out. Browne survived the last three rounds through jabbing and clinching, while not engaging the action very much. The judges scored the bout a split decision favoring Browne with the scores of 76-74 Browne, 76-75 Browne, 76-74 Kalajdzic.