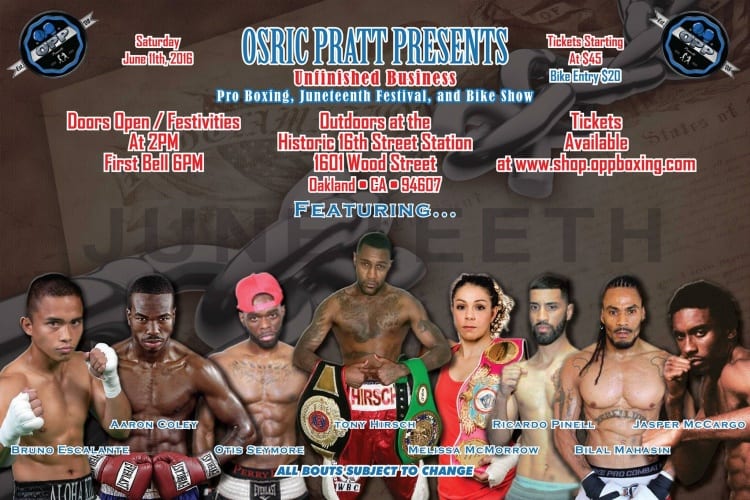 O.P.P. Presents Boxing is back on June 11th with an all-day boxing, Juneteenth Festival (music festival) and bike show. The event which will be titled “Unfinished Business” will take place outdoors at the historic 16th street station in West Oakland, CA at 1601 Wood Street with all the matches put together by Andy Nance.

The card will feature the return of WBC U.S. middleweight champion Tony Hirsch (20-6-2 8KOs) returning to his native Oakland, CA for the first time since 2012. The long-time sparring partner of Andre Ward has been a game veteran who has had a few tough breaks go against him in the fight game, but is known as a formidable foe for anyone stepping foot inside the ring and eager for his return to his hometown.

Also, WBO flyweight champion Melissa McMorrow (10-5-1 1KO) will fight in the Bay Area for the first time since 2009 as she has spent most of her career being a road warrior and picking up titles on the road mainly in Mexico and Germany.

Bruno Escalante (14-2-1 6KOs) of San Carlos, CA will face Mike Ruiz Jr. (10-4-2 4KOs) of Fresno, CA in a rematch from their close bout in 2013 that saw Escalante winning the super flyweight IBA title. The first bout was a competitive affair that Escalante dominated in the later half, Ruiz will now be looking for redemption.

Also on the card will be junior middleweight Aaron Coley fresh off his win on the Andre Ward-Sullivan Barrera undercard, welterweight O.T. “Champ” Seymore who is currently undefeated with all of his wins by knockout, junior middleweight Ricardo Pinell who spent time during this camp sparring welterweight Andre Berto as well as Oakland, CA’s Bilal Mahasin and the professional debut of Jasper McCargo. Opening the card will be Andres Salas (1-0 1KO) of Stockton, CA taking on fellow unbeaten cruiserweight Blake McKernan (1-0 1KO) of Sacramento, CA.

The card is being put together by Andy Nance with the ring announcer being Jim Cooley.

The event begin at 2:30 P.M, with the first bell at 6 P.M. Recording artists Richie Rich , Beeda Weeda , Aka Frank & Jay Ant of HBK have committed to Live Performances with more artists to announce. This will be an all day event. Tickets will be available online May 2nd , 2016 at www.oppboxing.com.