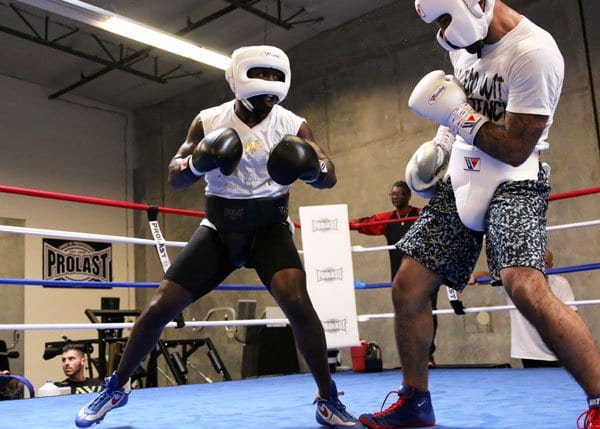 Former two-time world champion Andre “The Beast” Berto has wrapped up training camp and is set to travel to Southern California for his highly anticipated rematch against “Vicious” Victor Ortiz that headlines PBC on FOX this Saturday at StubHub Center in Carson, California.

On his improvements since his first fight against Ortiz:

“I’ve improved tremendously. Mentally and all the way around the board. There was so much that went into that fight and that camp the first time. I shouldn’t have fought that fight, but being who I am, I wanted to get in there. I was just a young fighter who didn’t take the fight seriously. I overlooked my opponent. Now I’m a much more mature fighter. I’ve pushed myself for this camp.

“This fight has always been on my mind. Even when I tried to move on, other people continued to remind me about it. Everyone said I needed to get him back. That’s the fight everyone has wanted to see and that everyone deserves. I’m going to give everyone the fight they deserve.

“I believe that coming back from my shoulder surgery that I’ve been more motivated and improving as a fighter. Everyone has seen the improvements. We’re definitely ready for anything he wants to bring. If he’s aggressive we’re ready and everyone knows I can stand there and punch”

On this training camp with Virgil Hunter:

“Everything is going great. It’s been a long, tough camp. I’m excited and ready to close it all in. We’ve done all the work. We’re in great shape. No stone was left unturned. It’s been a great eight or nine week camp.”

On sharing training camp with Amir Khan and Andre Ward and the motivation it provides:

“We all feed off of each other. All of us have pretty much been in camp together leading up to and through all of our fights. Even now Andre is there to watch us spar and work. It’s great motivation for all of us to be there. We’re all pushing each other to get better every day.”

On how Virgil Hunter has helped him improve as a fighter:

“I call Virgil the professional because he’s a teacher. He works you mentally. Each and every day. It’s like being in school. He drills it in your head over and over. He doesn’t let you go through the motions. You have to stay on track mentally to work on all of the things that you’ve been working on. He’s more of a teacher than a trainer.”

On what he learned from his fight against Floyd Mayweather:

“A lot of people can’t handle the atmosphere and the buildup of that magnitude. I got the chance to really find out how to handle it all. I think I surprised a lot of people around me with how easy I was taking it. I think Floyd was surprised too, he thought I would get shaken like other guys. But I felt like I was supposed to be there. I wasn’t going to be the guy who stands there in shock.”

On preparing for Ortiz:

“You have to be prepared for whatever he brings to the table. You don’t know how Victor is going to fight and if he’s going to do his extra stuff. Or if he’s going to try to box. Who knows? Maybe you hit him two or three times and he feels like he doesn’t want to be there. I’m prepared for the Victor of five years ago.”

On Ortiz’s claim that he will knock out Berto:

On what fans can expect Saturday night:

“The fans should expect an exciting fight. They might see the start of round 13 from the first one. It’s going to be extremely exciting. I doubt it’s going the distance. This is the fight the people deserve.”