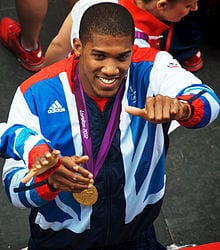 IBF heavyweight world champion Anthony Joshua (16-0 16KOs) will take on Dominic Breazeale (17-0 15KOs) on June 25th in the 02 Arena, Joshua announced via his Twitter early this morning (in the United States).

The battle will be in theory Joshua’s toughest test as he dominated previously undefeated world champion Charles Martin in two rounds to win the IBF heavyweight title earlier this month.

Breazeale, who recently stopped Amir Mansour by breaking his jaw, is taking his biggest step-up to date. Breazeale was originally set to face Charles Martin last December, but Martin pulled out of the fight in order to fight for a world title.

Get To Know: Adam Piccolotti