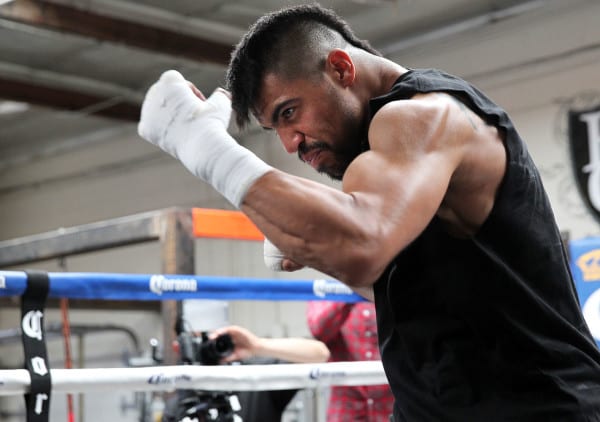 Fight week kicked-off Wednesday afternoon with media workouts for the long awaited rematch between former world champion “Vicious” Victor Ortiz and Andre “The Beast” Berto that headlines Premier Boxing Champions on FOX and FOX Deportes on Saturday, April 30 from StubHub Center in Carson, Calif. The action begins at 8 p.m. ET/5 p.m. PT and features an explosive battle between Light Heavyweight sluggers Edwin “La Bomba” Rodriguez and Thomas “Top Dog” Williams Jr. plus unbeaten Featherweight Jorge Lara taking on former multiple division world champion Fernando “Cucholito” Montiel. Tickets for the live event, which is promoted by TGB Promotions, are priced at $209, $105, $53, and $27, plus applicable taxes, fees and service charges, are on sale now and are available for purchase online at AXS.com.

Prior to the start of televised fights, an Official Fan Fest will be held for ticket holders outside of StubHub Center. The events start at 2:30 p.m. PT and features a Corona Beer Garden, food trucks, music from the band Metalachi and autograph signings with popular fighters such as Leo Santa Cruz, Abner Mares, Shawn Porter and more.

“I put a total of 14 weeks of work into this fight. Nothing easy about that work. Come the 30th, I’m going to prove why I beat Berto the first time.”

“I know what I’m here to do. I’ve got my fire back. People claim that I don’t have the fire, but you’ll see on April 30.” “People don’t know what I go through on the daily. When I’m injured for months at a time, I just have me and my team. We work hard.”

“I’m going to be back on top in no time. That’s my opinion. I know where I belong.”

“I’m focusing on Berto. That’s my target and that’s my focus.”

“He’s done what he’s done. You have to respect that. I’m here and I’m not going anywhere. We’re going toe-to-toe.”

“This is the type of game where if you don’t respect it, it won’t respect you. I’m in a much better place right now. I’ve learned a lot over the years since the first fight. I’m healthy and focused.”

“I’m just ready to go. Camp was tremendous. We’re really ready to get in there and do it.”

“There’s a lot that goes into this for me. It was my first loss and I had so many emotions back then, so it’s time to get that monkey off my back.”

“My plan is to win this in a fashion so there will be no third fight. “My focus is on getting the victory Saturday night. I want to look good doing. I’m not thinking about anything after that.”

“I’ve worked on a lot of different things in camp. We’re going to do whatever it takes to get the win.”

“You all haven’t ever seen me look like this. I’ve pretty much locked myself in a cage for eight or nine weeks. I’ve put everything aside. I’ve just been grinding.”

“He’s got some power and some style. He can do a few things. We have to go at it.”

“I feel great at this weight class. I have the speed and strength to make an impact in this division.”

“I hadn’t fought a southpaw in a while but we’ve had great sparring with guys like Marcus Browne. I feel very prepared. I’ve never had an issue with southpaws.”

“I’m excited to be back on the west coast. This is an incredible card. I was at the first fight between Ortiz and Berto and It’s going be another great fight. But I’m coming to steal the show on Saturday night.”

“In boxing you’re as good as your last fight. Right now I’m a warrior who took more shots than I should have. I’ve improved quite a bit but I want to improve on any fights. I’m not going down again.”

“Win, lose or draw you know Thomas Williams will bring the fight to you. I’ve been dropped and gotten up. This won’t go the distance, so don’t blink.”

“I’ve been boxing since I was five-years-old. I have an amateur pedigree and been pro since 2010. I had to take some time off in 2014 but now I’m back and stronger than ever.”

“The biggest challenge is just getting to the ring. I don’t want to get caught up in the talk of what he does. It’s just going to be me in there. If I go in and do the things that I’m supposed to do, I should come out on top.”

“You have to keep your punches short against a pressure fighter. A short punch will beat a wild punch any day. I just have to keep my composure and stay relaxed.”

“I haven’t watched any of his fights. I leave that up to my trainers to create the game plan and we go from there. I have seen him fight before. We were on the same card, so I did have the chance to watch him live.”

“Montiel has been around a long time. He’s been a world champion and he comes to fight.”

“I’ve studied him and watched him fight before. I feel I know him very well. I have a plan for how I’m going to get to him.”

“I am very well prepared. I’m not worried about his experience. I’ve trained hard to be ready and I know what I have to do on fight night.”

“The winners in this fight will be the fans. We are going to put on a great show and give the fans something to remember.”

“If I can beat him, I can move up the rankings and get closer to a world title shot. That is my goal and this is a big step on my path.”

“I’m really pumped up about fighting in front of the fans in Southern California. I know they will appreciate my style and it will be a great atmosphere on Saturday.”

“Lara is a young talented guy and I’m going to have to be at my best. He’s a dangerous guy and I will have to be ready.”

“I had to change everything to fight the left-hander after preparing to fight Abner Mares. We had a great camp and we will be ready.”

“I’m excited to be on a card like this. I think the main event is going to be a really fun fight for the fans. I see both guys going down during the fight but I’m going with Victor to win.”