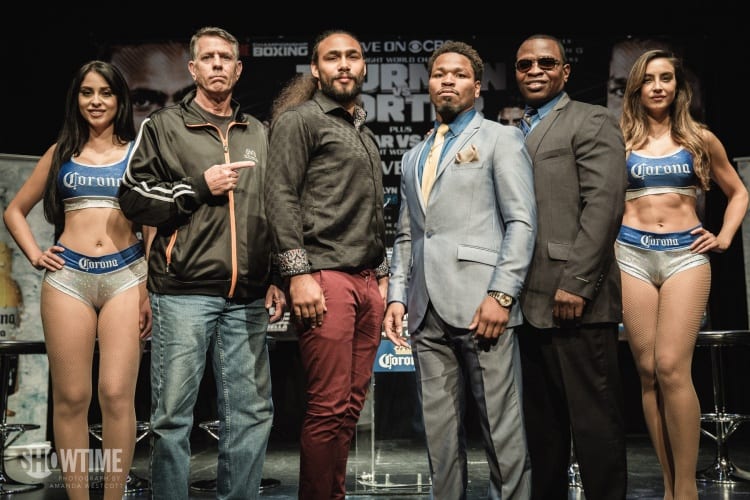 Tickets for the live event, which is promoted by DiBella Entertainment, start at $42, not including applicable fees, and are on sale now. Tickets can be purchased online by visiting www.ticketmaster.com, www.barclayscenter.com or by calling 1-800-745- 3000. Tickets are also available at the American Express Box Office at Barclays Center. Group discounts are available by calling 844-BKLYN-GP.

Thurman and Porter went eye-to-eye and talked about their eagerly awaited 147-pound world title clash that takes place in primetime on June 25.

“I made you wait. But it’s worth it. This is a tremendous fight. Arguably the best matchup of the year. We’re going to work our butts off to make it the Fight of the Year.”

“Our two teams go way back. This is the most beautiful moment of my professional career and I’m about to compete with somebody I grew up with. I’m happy for my success and I’m happy for Shawn’s success. We come from the same boat. When you’re a young kid in the gym training and then you’re here today, that takes a special kind of person. Shawn and I are both that kind of person.”

“We took six weeks off after my accident, with three days a week of physical therapy. I was relaxing at home. I didn’t like it. As a fighter, I wanted this fight as bad as the fans wanted this fight.”

“Barclays Center makes this a big fight. We get to promote here in New York City. New York is a fight town. My favorite fighter of all time, Mike Tyson, is from Brooklyn. This just happened to work out for the best.”

“I anticipate most of the welterweight division being in attendance on June 25. The situation that division is in right now is that we’re all in a frenzy. Everyone wants the spotlight and everyone wants to be the top dog. We all have that opportunity.”

“I want to have two titles by the end of this year. People talk about replacing Floyd Mayweather, but you can’t become the man without beating all the people in front of you. One fight at a time. I want to stay at the top by grabbing another belt. I’m going to show that I’m the big dog at 147 pounds.”

“June 25, my friend is about to become my enemy. I’m going to treat him like any other enemy.”

“I’m very excited about this fight. I’m blessed to have this opportunity. Not only to go for this title but to be a part of a recordbreaking show at Barclays Center. This night is going to be memorable.”

“Keith Thurman is bringing out the competitiveness in me to a level I’ve always wanted. It’s a level I expect. I have a guy next to me who is challenging me more than ever. Me and Keith Thurman are going to put on a show. Everything you talked about, you’re going to get it. “It is amazing to be a part of something great like this. I’ve always considered myself to be a very good fighter and a very good athlete, but I’ve always wanted something like this and to have it is very humbling.”

“I wasn’t surprised that Keith said he would knock me out. He has to pump himself up and be confident. When he looked at me I think he was trying to convince me that he was being real and I was looking at him to find out if he was convinced. He thinks he’s going to knock me out, I say he’s not. I’m going to do everything it takes to beat him and make it look easy.”

“This is forming to be a big fight, one of those fights that we’ve looked forward to since we were kids.”

“This is my second time fighting at Barclays Center. I’m 1-0 with a championship so now I’m looking for another one. I’ve been to some of the other fights at Barclays too and it is really an electric atmosphere. People are coming out to see something great and that’s what I’m going to give them.”

“I’m not changing anything in camp because of how familiar Keith and I are with each other. I have to do it at the right time in the ring. We’re going to do everything we do to prepare for a world championship fight.”

“Thurman is a little unorthodox at times so we’re prepared for that. It’s about going 12 rounds or less and looking good doing it. We’ve done a little sparring as pros but nothing as competitive as I’m expecting on June 25.”

“I have a feeling Keith is going to say he’s knocking me out a lot. I want to know if he believes that. He’s a cutthroat kind of fighter. I know that. The hands will be up, the defense will be taken care of, and we’re taking care of business.”

“We’re looking forward to this fight. Me, Keith and the Porters go way back, but sometimes you have to fight your friends.”

“These two guys are both at the top of their games and the best man is going to win.”

“Dan Birmingham is actually one of my mentors and I’ve been watching Keith since he was 14-years-old. We’re all friends but to have the opportunity on this stage, I don’t think we can have better competitors as fighter and trainer. I don’t think it can reach a higher level.”

“I fully expect the immovable object versus the irresistible force meeting in the ring for an explosion on June 25.”

“This is the best that boxing has to offer.”

“Keith Thurman vs. Shawn Porter could very well be the Fight of the Year. It’s a fan fight that everybody has anticipated for many years. These are the two most established welterweights in the world battling to see who the successor to Floyd Mayweather’s domination of the division is.”

“We’re in the midst of perhaps the strongest run of boxing this network has ever had. While other networks cut back on programming, we are reinvesting in the sport and giving it as big of a platform as there ever has been.”

“We have the strongest lineup of any network this year. These are two of the strongest fighters in the most popular division in the sport.”

“The last primetime boxing match on CBS was 1987, Ali-Spinks 1. Those are big shoes to fill. When I pitched a fight for CBS I knew I had to bring something that was incredibly strong. That is what we have on June 25. This card has come together as perfectly as anyone could have imagined.”

“Two of the top five welterweights of their career battling for the top of the division. This is an event that speaks for itself. I’m proud to be involved with this event.”

“I’m a huge boxing fan and this is one of those nights that you circle on the calendar. You need to be there. We’re off to the best presale and on sale since we opened Barclays Center. We have a bit of a history already and this will be the biggest one yet.”