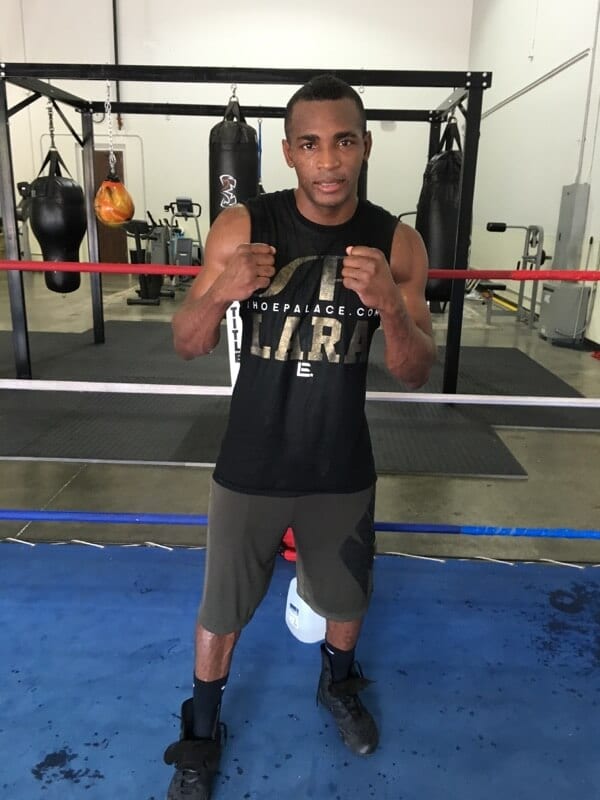 “Absolutely. This is something I want to do. I’m fully aware of everything going on in the United States and Cuba and if it’s possible I would love to headline a fight in Cuba one day.”

“I don’t choose my opponents. They tell me who I’m fighting and I prepare and I fight to the best of my abilities and that’s what I have done in every fight. This is the fact and we both trained so this is not realistic at this point. But would I fight him? Yeah. I’ll fight him and win.”

“To me I was winning the fight easily. I was out boxing him. If you go look at CompuBox I out landed him in every single round of the fight. I was doing my job. Obviously we fought on his turf like I always do. I fight fighters on their turf like I do. Now it’s on my turf and actually I felt like I was winning the fight 100% and I was coming on strong. I was winning the last few rounds before the cut and I was on my way to stop it and then before, you know, he decided not to fight. So I’m looking forward to this fight. I’m very excited to fight and it’s time to put a period on the fight and end it. And show everybody why I’m the best 154 pound in the world.”

“We know, we watched the first fight. That was four years ago. He’s got a lot better. I changed a lot also. We have noticed the fight there to be that we would do from the first fight. But there’s a lot of new things that we need to do. My main concern about this fight is that I just hope it’s a clean fight cause the first fight was really a dirty fight. There was a lot of low blows, a lot of head-butts and things like that. Let’s just hope the referee does his job better but we’re ready for anything and the first fight was a learning lesson. And it’s going to be the best fight on this night.”
“I have to be ten times more aggressive. And I guess I need to win the fight. You know, way better, trying to be more aggressive to show the judges we’ve moved on than the judges have.”
“He was running the whole fight. I stopped them but he was running, man. He was running the first few rounds and then he started running the whole fight. I don’t know what he’s talking about. He was stopping me. You know what I mean. I know he felt me in the first fight he’s going to feel me ten times more in this fight. He wasn’t stopping shit. If he was stopping I feel like the head butt was on purpose. The low blows were on purpose. Fight a clean fight and don’t play with my balls the whole fight and we’ll see who’s going to stop who in this one.”

“No. Austin Trout is a familiar name, familiar face around me and around the boxing world. I’m just as prepared as I was for Campfort as I was K-9 and the fights before. We trained very hard. He knows that we are going in to the fight expecting to get ready for a battle.”

“I mean, really, to me personally, honestly, we’re not with all of the pressure and all of the, you know, the words that come with just being great and doing everything we have to do, we plan on making history regardless.
And this just happened to be the time where we both hold the World Championships in the division. And I’m not trying to put pressure on my brother, I just know, I need him to go, do his job in that we both come out victorious and make history.”
“The last time I fought a southpaw was – I had a few fighters fight southpaw that I didn’t fight. I actually trained with a few southpaws. But I think I actually had fought a natural lefty so this would be the first experience that I’ll be able to fight a lefty.”

Well, first, it’s, he’s a good fighter. You know, possibly a great fighter. I’m very excited about this opportunity to fight and win the title.
Very few people get a once in a lifetime chance you can’t be – I’ve had the pleasure of having two chances. I’m definitely not going to let this pass me by. I’m very excited to pull this fight. It’s a good fight for everybody. A good fight for me, a good fight for Jermall and a good fight for the fans. You know, everybody is going to win at the end of the day, but I have to have my hand raised when the night’s over.”
“To be honest, man, I wasn’t surprised that it’s taken this long because really I thought I’d have to start from the bottom going back. Other people’s going back to the lower fights.
So I was blessed to be able to have my fights televised. Not necessarily the stomping grounds hero, but you were probably going to ask what I was prepared for. It’s surprising that it took 2-1/2 years. I guess I’m surprised that it didn’t take longer.
In boxing I feel like they’re quick to throw you away. I felt like they didn’t want me when I was in first place. You know all the fights that I got into, I wasn’t necessarily supposed to win. I wasn’t supposed to win the Cotto fight.”

My whole family – yes, everyone is excited. Everyone will be in Vegas. It’s something that we’ve all seen, the reason why we box for, so I can’t really, you know, explain how excited they are, but I know how I felt that I – I’ve seen World Titles slip by the wayside, but that’s not, that’s nothing I can control.
That’s something that I had no control over even (they ranked) Number 2 on the IBF. My brother grabbed that title, and I was extremely happy for him to have that title. More happy for him, just as well as happy for myself.”
“Marketing is everything, and we do what we have to do. I don’t remember; I don’t even remember who they was playing against. I’m really not much of a baseball fan. I did watch the game; it was exciting.
I’m sponsored by the Astros of Houston, which is a great (team), and it was fun. It was exciting to sit and, you know, throw a pitch and make sure I threw a strike. That was one I did not practice. That was something. So you know, it was a game that the Astros actually won after losing so many games, so I was excited to be there and to be a part of that.”

“Yes, hey, man, I just want to say thanks for having me. It’s a privilege and an honor, and I’m ready for Showtime.”

“So I know Jermell is going to come in there ready, and I’m going to be ready, so I’m expecting a great fight, man. And I expect to put on a good show, you know, for all the fans.”

Keenan Carbajal returns to ring May 20th in Tucson, Arizona