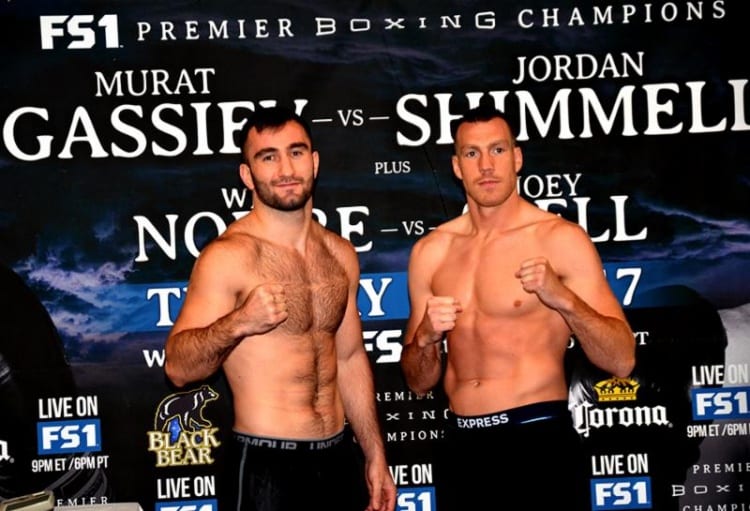 In the main event of a national televised card from Carlson, Minnesota broadcast by Fox Sports 1 a new IBF cruiserweight contender was named as Murat “Iron” Gassiev (23-0, 17 KOs) knocked Jordan Shimmell (20-2, 16 KOs) out cold in the first round on Friday night at the Black Bear Casino Resort in Carlton, Minnesota. Gassiev landed a hard left hook that left Shimmell motionless for minutes after the fight in which oxygen was brought in for the fight as a safety concern. Before the knockout, Shimmell was outboxing Gassiev for what it was worth. Gassiev will face the winner of this weekend’s bout between Denis Lebedev and Victor Emilio Ramirez who are fighting for the title.

Veteran heavyweight Joey “Minnesota Ice” Abell (32-9, 30 KOs) pulled off a third round upset by technically knocking out  Oklahoman Wes Nofire (19-1, 15 KOs). Southpaw Abell bloodied Nofire in the second round and eventually drop him to end the round. Abell dropped him two times in the third round with the fight being waived off after the second knockdown

In a swing bout, Cuban featherweight prospect Leduan Barthelemy (10-0, 6 KOs) stopped Rafael Eduardo Reyes (7-8, 6 KOs) at the end of round two when he missed with a right uppercut, but landed a check left hook that forced Reyes to have an ankle injury.