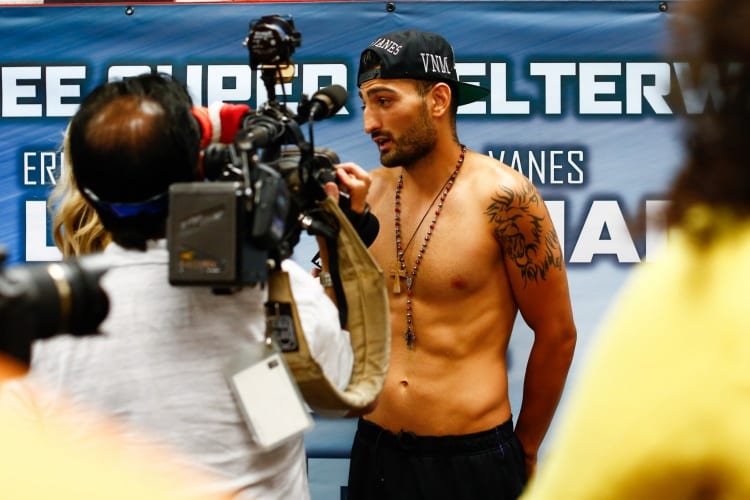 Fight week kicked off Wednesday with media workouts at the UNLV Boxing Gym for the six fighters competing in the SHOWTIME CHAMPIONSHIP BOXING tripleheader of 154-pound world title fights this Saturday, May 21 from The Chelsea inside of The Cosmopolitan of Las Vegas.

Tickets for the live event, which is promoted by Mayweather Promotions and TGB Promotions, are on sale now. Ticket prices start at $39, and are available online at www.cosmopolitanlasvegas.com or through Ticketmaster at (800) 745-3000; www.ticketmaster.com.

“I’m not surprised that I’m fighting Vanes again. It’s my job to fight whoever they put in front of me.”

“I felt that I was a better fighter than him the first time and I’m a little better in almost every area since. One of the most important things is my way of training and my way of getting prepared. I feel that I am much more mature.”

“I like being back in Las Vegas again. I’m definitely prepared to do what I do – and that’s win.”

“After I win Saturday, I would love to fight GGG or Canelo, but I would prefer GGG. It’s not frustrating that I’m not fighting the biggest names all the time. I’m a headliner.”

“I don’t feel any pressure. I’m just going to do my job and just keep winning. As long as I keep winning, everything will take care of itself.”

“I’ve been fighting as a pro for over 10 years. This is definitely the most important fight of my career. It’s do or die. Win and I move 10 steps forward, lose and I go 10 steps backwards.”

“Beating Lara this time is 10 times bigger than if I had won the first time. Lara has gotten better, maybe his style hasn’t changed much, but I feel that I’m much better too.”

“There has been lots of changes in my camp. All for the better. I’m more focused in training. We’ve gone back to doing things the way we used to. I’ve really been dedicated. More than ever.”

“I’ve given 100 percent every single day in the gym. This is going to be a tough fight. I hope he comes to me. It makes for a good fight. Actually, I think he is going to come forward a little more than people expect, but I’m prepared to chase him. Whatever it takes to be effective.”

“If he is aggressive, once he feels my power, he is going to go back to what he does best – running. “I’m coming to give my all.”

“All of the lost opportunities were part of my journey to get to this point. I know people aren’t going to give me my credit for fighting Trout because people will feel like he has had his time in his career, which we all do, but now it’s my time and I’m taking every opportunity I can.”

“I look back at the situations I’ve had to get here and it’s exciting. I have a big name opponent in Austin Trout and I feel like the underdog. I’m the young buck in the game who’s trying to be the lion. Although I do have the belt, its because I had to take it from someone that didn’t deserve it.”

“Every time Austin Trout gets to this level, he fails. He didn’t fight the same Miguel Cotto, he just wasn’t himself that night. I have to come in there and take what’s mine.”

“Whatever happens, I’m excited. We train, we prepare for 12 rounds. I’m prepared for whatever I need to be. “I’m excited to be here and fight and be able to support my brother. We’re able to roll through anything and keep looking forward. The good and the bad.”

“Everything I’ve been through; I try to move forward every fight. I got the belt from Cornelius Bundrage, I defended the belt and now I have the opportunity to fight Austin Trout – a bigger name.

“I take my hat off to him. He’s undefeated. He’s a champion. I’ve been through more to get to where I’m at. I’m more of a dangerous fighter.”

“He’s not one to shy away from a challenge. I feel like I’m a better fighter. I’m shocked that I got a title shot this fast. I thought I was going to have to go back to the drawing board. The opportunity came and I’m so excited.”

“I’ve been working on my inside game. The things outside of the ring – tightening up myself as a person. It’s been helping me in the ring.”

On Jermall predicting a knockout:

“He’s dreaming. Everyone has dreams, but I’ve been known to bust people’s bubbles. No one has been able to knock me out. He thinks he’s a great man. A better man than Canelo or Lara? He’s tripping. “I’m probably his toughest test to date. “The next chapter would be to fight my mandatory, unify and be undisputed champion.”

“This is history in the making. It’s extremely exciting. We never really thought about it like this. We knew we would be boxing and winning titles, but this is special. We have the opportunity to both be world champions at the same time.”

“We don’t know what to expect on Saturday, but we’re excited to put on a show and make a mark.”

“I have to get in there and prove to my opponent and the rest of the world that I’m dangerous and I will be victorious. “We always wanted to fight. We always want to prove ourselves to each other. About everything. We caused trouble but found ourselves in boxing.”

“I thought my opportunity would come first, but everything happens for a reason. Look at this moment. It’s motivated me and now it’s paying off.”

“The new training camp has been an adjustment, not being with my brother every day. I’ve been able to define who I am and my brother is able to do his thing.”

“My motivation is that I was once with my brother everyday. What pushed me so much in camp was knowing that I’m not with my brother everyday, but I’m still in the same shape, even better and stronger. Not through coaches, but in general. Mentally I’m the same or better. We didn’t get worse because we split. The point is what we are doing to stay in shape physically and mentally to be the best we can be.”

“This is going to be a good fight. It could be the best fight on the card. I’m an explosive fighter so expect fireworks.”

“My dad has given me advice my whole career. I have a lot of great insight about how to manage my emotions. He’s instrumental in my corner. I’m 100 percent ready.”

“There is a lot of pressure on Jermell, but I’m sure he’s not over thinking it. I’m expecting the best Charlo in there.”

“I go in there to go to war. Whatever happens, happens. I’m going to leave it all in the ring and give the fans a great show.”

“I’ve been dreaming about this moment my whole life. I’m 100 percent ready for this and I can’t wait to perform under the lights.”

“Make sure you tune-in, because I’m going all out for the belt.”

“We’re very busy. We are going full steam ahead. We are doing events, putting butts in the seats and promoting our fighters.”

“This is a great card. Anytime you can put the top fighters in a single weight class on the same show, it is bound to be a great event for the fans and for the sport in general.”

“We’re happy to be working with SHOWTIME once again to put on another tremendously competitive fight card for the fans.