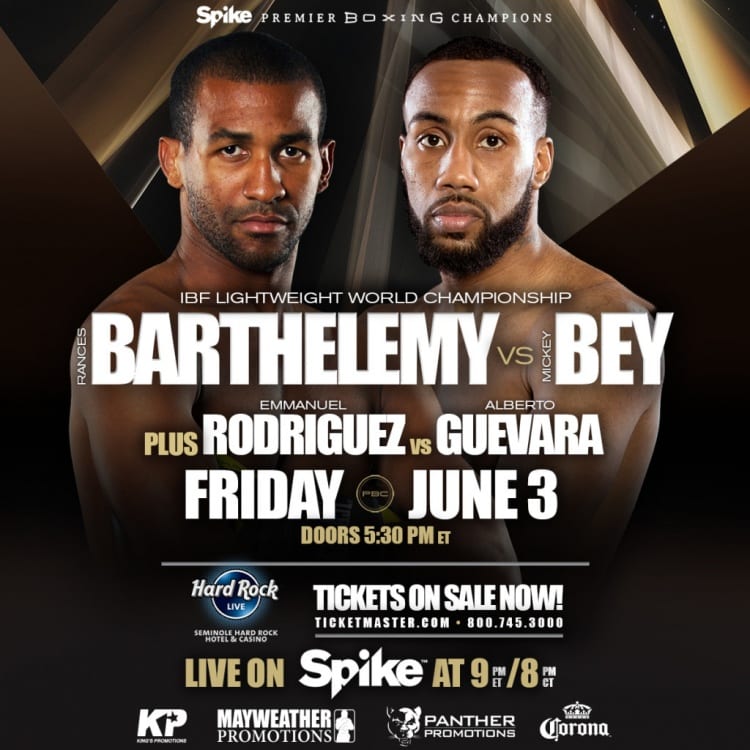 Mickey Bey will try to regain his IBF lightweight title on Friday night against current champion, Rances Barthelemy as the main event of a June 3rd Spike TV telecast taking place at the Seminole Hard Rock Hotel and Casino in Hollywood, Florida.

Last month, our editor Lukie Ketelle and pro boxer Troy King, as Mickey Bey who was in attendance for Victor Ortiz-Andre Berto II in Carson, CA at the StubHub Center.

Bey explained that he fought Miguel Vazquez with one hand as he remarked that he would of “…beaten the hell out of him with two hands”, but acknowledge Vazquez is a really good fighter.

“See I don’t like easy fights, I am the one who asked for this fight! I could of took one of the easier cats, but to me [Rances Barthelemy] was the most challenging fight.”

Bey would later explain that he feels that this fight is deeper than just a fight, but also a match-up of effective styles in technical boxing as he furthered

“We both pretty much do it all, he [is] from Cuba, they think, you know, Cuba [has] a good background.  We got the best pro background, me training with the Mayweather’s my whole career. He has his Cuban school and I have the Mayweather school, we will see who will come out on top.”

It is important to note that Mickey Bey will be fighting for the IBF lightweight title he vacated late last year when a hand injury kept him from defending it against Denis Shafikov. Shafikov would fight Barthelemy last year on Spike TV for the vacant title, a bout in which Barthelemy won.

The card promoted by Kings Promotion and Mayweather Promotions will start at 6PMPST/9PMEST.