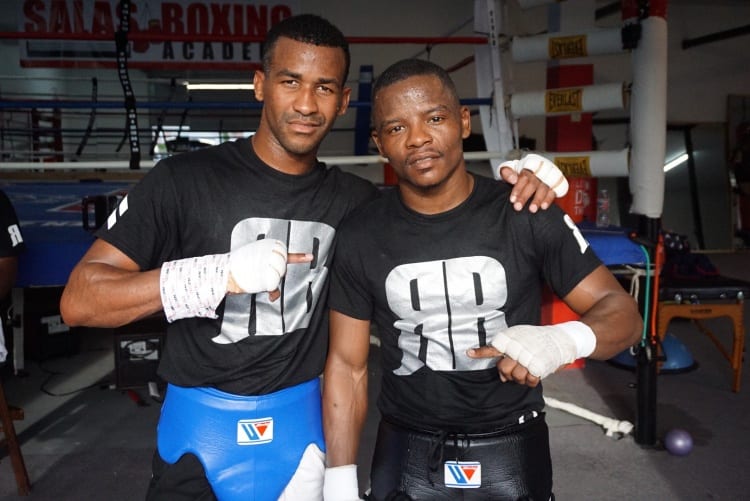 Sean Michael Ham / Premier Boxing Champions
Lightweight world champion Rances “Kid Blast” Barthelemy and former world champion Mickey “The Spirit” Bey went face to face for the first time Wednesday as they participated in the final press conference and media workouts forPremier Boxing Champions on Spike this Friday, June 3 from Hard Rock Live at Seminole Hard Rock Hotel & Casino, Hollywood, Florida.
Action begins on Spike at 9 p.m. ET/8 p.m. CT and features exciting bantamweight prospectEmmanuel Rodriguez taking on former title challenger Alberto Guevara in a 10-round bout. Also in attendance Wednesday and competing on the undercard is undefeated C aleb “Sweet Hands” Plant, who battles Carlos Galvan on Friday night.
Tickets for the live event, which is promoted by Kings Promotions, Mayweather Promotions, and Panther Promotions, are priced at $130, $80, $60, and $35 (additional fees may apply) and are on sale now. All seats are reserved and available at all Ticketmaster outlets, online at www.myhrl.com,www.ticketmaster.com or charge by phone: 1-800-745-3000. Doors open at 5:30 p.m., with the first fight set to begin at 6:30 p.m.
Fighters spoke to media and posed for cameras at the Paradise Live Theater before moving into the Hard Rock Live Arena for media workouts.
Here is what the fighters had to say Wednesday:
RANCES BARTHELEMY

“I’m very excited to be fighting here close to Miami. This is a second home for Cubans and I’m really motivated to put on a great performance for the fans.
“Ismael Salas is one of the top trainers in the world and our whole team has been fantastic. We’re ready to get in the ring and fight.
I come prepared with a few strategies. I never stick to one game plan because us Cubans were taught to have a few up your sleeve so that you can adjust according to whatever presents itself to you in the ring.
“If we don’t get the knockout, then we are ready to go the distance. My team is prepared to go the distance if we have to, but also to give an entertaining fight.
“You’re going to see a new Rances Barthelemy in 2016.
“Don’t miss this fight. Get there early, because it might not go five. Get ready for a great night of boxing.”

“I want to give Rances props for stepping up and taking the fight. This is the beautiful thing about boxing, the best fighting the best.
“You have a two-time champion fighting a world champion that never lost his belt in the ring. That says it all right there. We’re two elite fighters. We’re both going for glory.
“No matter what anybody says today, it comes down to the action on Friday.
“I’m in there with the same mindset no matter who I’m fighting. I’m coming in there to do what I do no matter what. It’s just another day for me.
“You’ll see a throwback fighter in there. I’m like the fighters from back in the day. I’m here looking for the victory. I don’t care how I get it and I can’t predict. But we want to have our hand raised.
“I’m coming to get what is rightfully mine. Don’t miss it.”

“I feel great and ready for Friday. I’m not worried about tomorrow at all, we’re right on weight, so we’re just looking forward to stepping into the ring at this point.
“We’ve been in training camp for six months as we had a tentative fight date scheduled prior to this so I was already in the gym getting ready. We’re in the best shape.
“We have seen footage of him and saw he makes a lot of mistakes. We analyzed those defaults and are using them as a strategy against him. We’ve put those into practice and think we will be able to execute them to come out victorious at the end of the night.
“He’s not your typical Mexican warrior fighter, he’s the total opposite actually so we’re not worried about what he does.”

“I’m ready for this big opportunity and I’m ready to fight. This is a big card and it’s very exciting.
“I know what I have in front of me. Emmanuel Rodriguez is a good fighter, but he’s just another opponent to me.
“I’m well prepared and I believe I’m going to win this fight.”

“I’m thankful to have this stage to perform on. I’m glad the media could come out and get a sneak peek of what I’m going to bring Friday night.
“The game plan is to go in there and look sharp, be slick, make adjustments and dictate the pace. He’s going to be uncomfortable because we’re going to dictate the pace. We’ll see if he can keep up.
“I’ve seen enough tape on, which wasn’t very much. I let my coaches breakdown the film and let me know what I need to do.
“This is my only job and I do it well. I’m not into getting ready, I stay ready. We’re here to show out.
“I’ve had a great training camp. I worked hard and I’m ready to put on a show this Friday night. I’m going to do what I always do in there.”