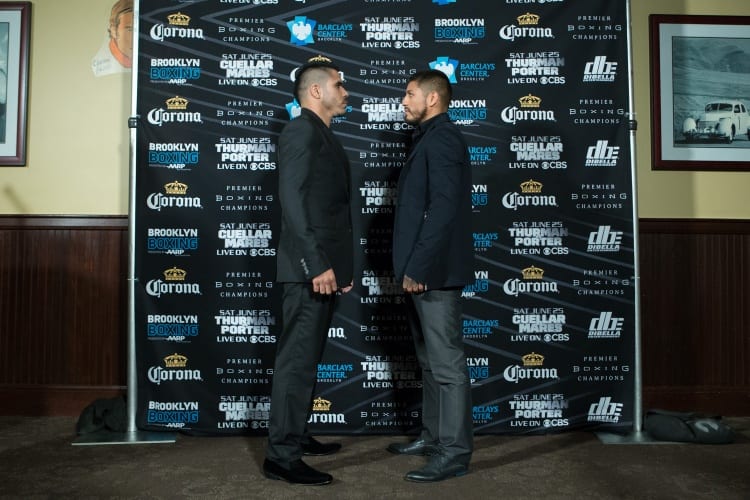 Featherweight world champion Jesus Cuellar and former three-division world champion Abner Mares went face-to-face for the first time Thursday as they hosted media roundtables in Los Angeles ahead of their showdown on Saturday, June 25 showdown live on CBS from Barclays Center in Brooklyn.

Tickets for the June 25 event, which is promoted by DiBella Entertainment, start at $49 and are on sale now. Tickets can be purchased online by visiting www.ticketmaster.com, www.barclayscenter.com or by calling 1- 800-745-3000. Tickets are also available at the American Express Box Office at Barclays Center. Group discounts are available by calling 844-BKLYN-GP.

“Win or lose, I always give it my all. In this fight, it definitely won’t be any less. It’s going to be a tremendous fight, a fight that I’m looking forward to for myself, for my career, for my family because winning this fight will make me a four time world champion.”

“I’m the type of fighter that wants to leave his career known as the fighter that never took an easy route and faced the tough fighters at their moment, at their times.”

“At the end of the day, that truly – you know, to me, that’s a title, to get the respect from the fans. So definitely, I’ve always chased the best and toughest opponent out there. No questions asked.”

“It’s basically just a training camp, where we are just learning day by day with our sparring partners and me being a student and Robert Garcia just telling me basically how to fight a southpaw and in this situation a southpaw that he knows very well.

But we’re not focusing on anything he saw that he knows about Cuellar. It’s mainly tapes that we’ve seen, his last fight, a few of his last fights and just based off of that and I think just my talent and my experience will definitely help out in this fight. More than anything, it’s just both of our experience put together and combine to make a perfect game plan for June 25.”

“We’re here. We’ve been training for over two and half months already and grinding and training really hard for this fight so I’m ready for June 25.”

“Also, that when I came to the U.S. I came to train with other trainers to figure something out because Juan was still with the national team, so the opportunity, when it presented itself, I brought him from Argentina when I was training with Robert Garcia.”

“I decided to train in L.A. at a pro boxing gym with all the Argentinians over there and that was just a decision I made. There wasn’t any animosity, any problems with Robert. Robert didn’t have the time to show up or to be there, so he did his own thing. And that’s why I went to LA.”