ESPN has stacked the deck with boxing in the month of July as super lightweight contender Sergey Lipinets (9-0, 7 KOs) against Walter Castillo (26-3-1, 19 KOs) in a 12-round bout. Lipinets is being fast tracked to a title shot after two impressive victories against worthy foes in his last two outings against Levan Ghvamichava and Lydell Rhodes. Castillo is a game spoiler, who has only lost to top prospects. This is Lipinets first 12 round fight.

The co-main event features featherweights Tugstsogt Nyambayar (5-0, 5 KO) will fight Rafael “Dynamite” Vázquez (16-2, 13 KO) in a 10-round bout. The event takes place at Horseshoe Tunica Hotel & Casino in Tunica, Mississippi and will be a part of the Premier Boxing Champions series.

The card will take place on July 15th. 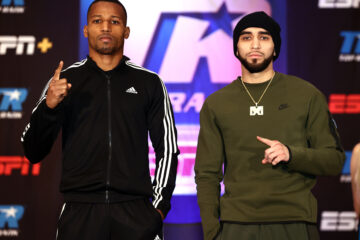