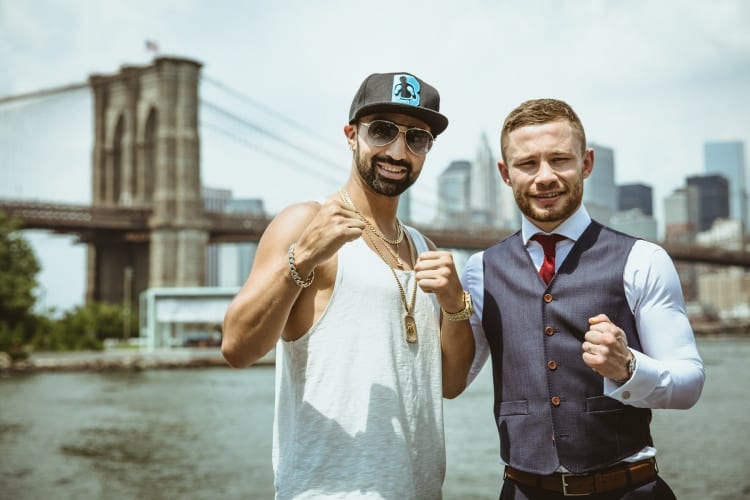 Frampton was joined by his manager, Hall of Fame former featherweight ‎world champion Barry McGuigan, and his son Shane, Frampton’s trainer. Frampton returns for just his second fight stateside aiming to win back the same WBA Featherweight World Championship that Barry McGuigan lost 30 years ago. McGuigan’s loss to Steve Cruz on June 23, 1986 was his second and final fight in the U.S.

Tickets for the live event, which is promoted by DiBella Entertainment in association with Cyclone Promotions and presented by Premier Boxing Champions, start at $38 and are on sale now. Tickets can be purchased online by visiting www.ticketmaster.com, www.barclayscenter.com or by calling 1-800-745-3000. Tickets are also available at the American Express Box Office at Barclays Center. Group discounts are available by calling 844-BKLYN-GP.

Frampton and Malignaggi posed for pictures outside of Barclays Center and under the Brooklyn Bridge before heading to Gleason’s Gym, where Malignaggi got his start in the sport, for Frampton’s first workout for New York media.

“I want to be in exciting fights. From here on in my career, I want to be great. Who better to face than Leo Santa Cruz? This is a chance to put my name down in history and become a two-weight world champion from Ireland.

“I’ve been listening to Barry McGuigan since I turned professional. I just wanted to soak all of it up like a sponge. He’s got so much knowledge and he’s been around for so many years. I just need to be around him and learn. Shane does an amazing job training me, and between the two of them, I feel like I’m benefitting every day.

“It’s very nice to be here in Brooklyn, it’s a lovely borough and it’s so great to be here in New York. There are a lot of boxing fans in New York and I really think this is the number one city for boxing.

“We’re bringing a lot of lads from back home, and I also hope the Irish-Americans get to know my name, and everyone in Brooklyn as well. I expect about 1,500 traveling fans from Belfast. I think I’ll have more support than Santa Cruz.

“This fight is huge for me because I really want to create a legacy. I know how people talk, and I think people will be talking about this for a very long time. I want people to remember me as a great fighter, that’s all.

“I train very hard for every fight. No less or no more for Santa Cruz. We’re expecting a very tough fight with a lot of action.

“Moving up to 126 pounds was definitely the right decision for me. I’m a big puncher but I lost power coming down to 122 pounds. I’m going to be punching harder and be at my very best.

“I’m right on the door step of everything. I’m so excited for fight night, it’s going to be a truly special experience.

“I think my fight with Bracero is an interesting clash of styles. We have similar styles in that we like to box and counter punch but we’re also both very familiar with each other. I’m sure he’ll have something up his sleeve for me.

“Making this kind of all-Brooklyn fight is great for the fans. We both have our own followings so it should make for an electric atmosphere at Barclays Center.

“The main event is going to be a great fight. When you look at the styles and the pedigrees of both men, it’s hard to predict what’s going to happen. Both guys have exciting styles so I’m betting on the fans getting their money’s worth.”

“After Carl defeated Scott Quigg and became a unified champion at 122 pounds, we believe that all of the exciting fights in that division have passed. We want to be involved in exciting fights.

“The Quigg fight wasn’t as exciting as we would have liked, but we knew it was going to be like that. We knew he’d come on late in the fight and we had our tactics planned well. This is going to be a much better fight because Santa Cruz is brave and takes chances. He also has underrated boxing skills.

“Shane is making Carl a better fighter every day. Every day that you don’t get better is a day you wasted. Carl is in the best physical shape of his career and we will have a plan A, B and C for this fight.

“Santa Cruz is a great fighter. He’s low-key, humble and he hasn’t talked trash. This will be Carl’s hardest fight. It feels great to be involved helping Carl reach his maximum potential, it’s the second best thing to being in the ring yourself.

“We believe 100 percent in Frampton’s ability to win this fight and that he will be successful on fight night.

“There are some great fights out there for Carl. We’re 100 percent committed to July 30 but there are lots of great fights in the featherweight division. We will have lots of support on fight night and I have no doubt there will be a large Irish crowd there to support Carl.”

“Leo Santa Cruz is unbeaten and there aren’t really any weaknesses from my perspective. He’s a phenomenal fighter, but I don’t believe he’s fought a fighter of Carl Frampton’s caliber, as an all-around fighter.

“When he meets someone who is as good, or in my opinion, better than him, we’ll see what he’s made of. I think it’s going to make for one of the most exciting fights of the year.

“I wouldn’t be taking on this fight it I wasn’t extremely confident in Carl, even though he’s coming in as the underdog. I don’t think Santa Cruz has ever felt the power that Carl brings before. I think Carl can beat him comfortably if he continues to prepare well, and then steps into the ring and does what he’s capable of doing.

“We’re finishing up camp now and making sure we’re 100 percent read. We have to be 100 percent to fight Leo Santa Cruz.

“Carl is extremely heavy-handed. He’s extremely skillful, a true all-rounder. He really lives the life, and that makes it easy for me. The way he trains, how he eats, how he sleeps: he takes it seriously and takes care of himself.

“The transition coming over to New York to finish training camp has been great. We could have waited until closer to fight night but we want every single percent to our advantage.

“We’re still acclimatizing to the heat, the jet lag is no problem and we’re going to be ready on fight night.