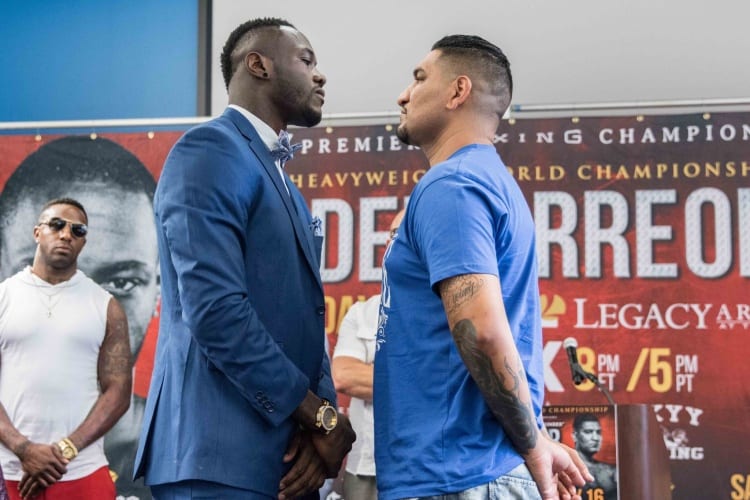 by Tanya Hill, who was ringside

WBC heavyweight champion Deontay “The Bronze Bomber” Wilder (37-0, 36 KOs) retained his title with an eighth round TKO over Chris “The Nightmare” Arreola (36-5-1, 31 KOs) on Saturday night at the Legacy Arena in Birmingham, Alabama in front over 11,000 fans as he continued his rise to stardom. Wilder dropped Arreola in round four, but an injury to his bicep Wilder accredited with the reason the bout went four extra rounds as it took a doctor stoppage in the eighth to end the bout. This was televised main event of the Fox broadcast.

In a 10-round battle between welterweight southpaws,Felix Diaz (18-1, 8 KO) upset Sammy Vasquez (21-1, 15 KO) who now no longer has undefeated record. Vasquez. In a fight in which Diaz’s experience in the amateurs showed as Vasquez was constantly off rhythm and unable to adjust saw a late point deduction be the deciding point of the bout.Vasquez spit his mouthpiece out for the third time in the final round which cost him a point, which proved costly.

The bout was scored a draw at first, but thanks to a scoring error in the final round it was awarded to Diaz. The final scores were 96-93 and 95-94 two times.

Junior middleweight Erickson Lubin (16-0, 11 KO) continued to impress as he dominated Ivan Montero (20-2, 8 KO) through all eight rounds on his way to a shutout victory.

Rigondeaux with stunning second round KO in UK