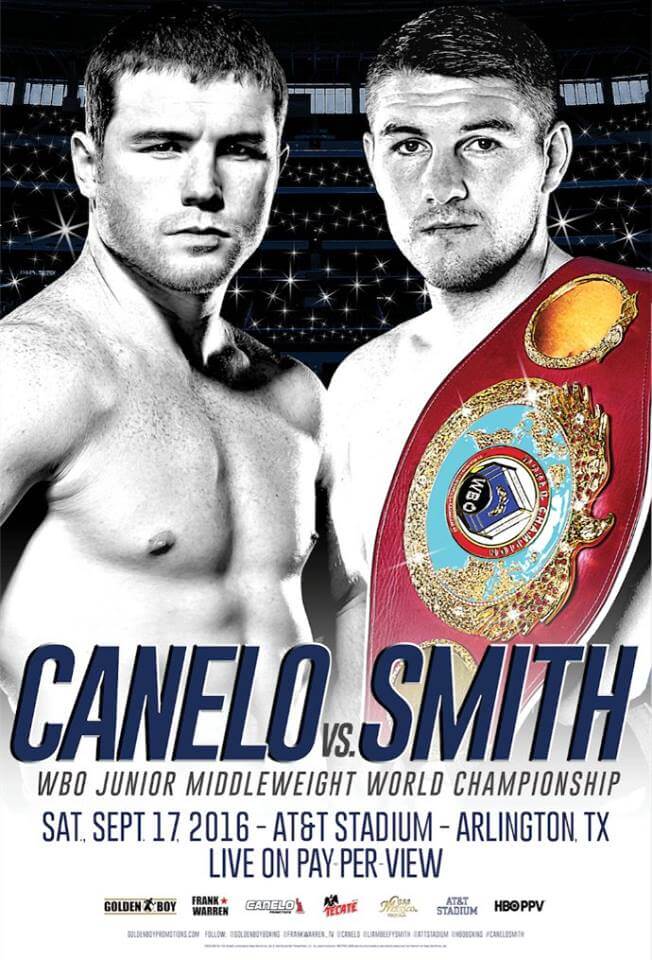 Located in Arlington, Texas, AT&T Stadium is home to one of the most iconic and successful sports teams in history – the Dallas Cowboys, and will host the big event between Canelo and Smith on Mexican Independence Day weekend, Sept. 17.

Canelo vs. Smith will be produced and distributed live by HBO Pay-Per-View® beginning at 9:00 p.m. ET/6:00 p.m. PT on Sept. 17. The heavy-handed combatants will head next to London, England for a press conference at The Landmark Hotel on July 20, 2016.

Oscar De La Hoya, chairman and CEO of Golden Boy Promotions, led those present at today’s press conference in a moment of silence to honor the victims of the recent tragedy affecting the Dallas Police Department and Dallas Area Rapid Transit officers.

Below is what the fighters, their teams, promoters and Dallas Cowboys Owner Jerry Jones had to say at today’s press conference:

“I had to work for my birthday, so I’m here to work. I’m very happy to be back in Texas again, in this beautiful stadium. I’m going to take this fight seriously and prepare like always. I know how I’m going to have to train. I like to give the fans a great fight, and that is what I will prepare for.”

“I am very excited, I have asked for a top name for a very long time and when Canelo’s name came to the table it was an automatic ‘yes.’

“We are coming very prepared for this fight, and I’m coming to win.”

“Everything is bigger in Texas, and here we are the iconic AT&T Stadium, where we have two world champion fighters known for knocking out opponents in the ring with their strength and power. Come Mexican Independence weekend, former two-division world champion Canelo Alvarez will face the undefeated WBO junior middleweight world champion Liam “Beefy” Smith for his title.

“Here you have Liam Smith, an aggressive, relentless fighter. His previous eight opponents have fallen before the final bell. And then you have Canelo Alvarez, who is only getting more and more powerful with each of his devastating victories.

“Both of these fighters come from boxing families. Boxing is in their blood. To Canelo and Smith, fighting is a family tradition and with that comes a responsibly to live up to the family name. That said, both of them will come to the ring on September 17 to wage a war: for Canelo, to claim a new title as the WBO junior middleweight world champion and for Smith, to successfully defend his WBO title once again and make a name for himself in the U.S.

“While the fights will be the highlight of the weekend–Golden Boy, Jerry Jones and the Cowboys will bring the people a week full of fun activities that fans will enjoy for the entirety of fight week.”

“These two fighters are champions. I’ve got to see Canelo fight, and I can’t tell you how impressed I am by his talent, to see it up close and personal. We have some great Hispanic boxing fans here in Texas. We recognize what a great talent Liam Smith is and what a great fighter Canelo is, and what he means to Mexican fans. It is a great gift for us to host this event on Mexican Independence Day weekend.

“When we built this new home for the Dallas Cowboys, we wanted great champions, great matches and to be part of the legacy of our stadium beyond just football events. It’s a great privilege to us to have this fight at our Stadium. In our stadium on the giant screens, you’ll be able to see every detail of the fight in the ring on Sept. 17.”

“We are fighting a tough fight with Liam Smith. There is a reason he is a champion. We are going to prepare like always with a lot of dedication, and we can win another title. I want to invite everyone in Dallas to come and support Canelo. We will see you in September.”

“We know that on Sept. 17, Liam Smith is coming to conquer America. He is coming to defend his title. We also know he has knocked out his recent opponents. We should be very aware so that we don’t have any surprises. We take this fight with a lot of respect and responsibility. This is an important fight in September, at an important stadium that is one of the best in the world. Viva Canelo and Viva Mexico!”

JOE GALLAGHER, Ring Magazine 2015 Trainer of the Year and Trainer of Liam Smith:

“Liam Smith is a world champion, and he is doing what world champions do: defending his world title against one of the best fighters in the world.

“We are going to have a good camp. Liam isn’t coming over here to be caught like a rabbit in the headlights. Liam Smith is a world champion and is going to take care of business on fight night.”

“I’ve known Liam nearly 20 years. I boxed with one of his brothers in the amateurs. Liam Smith is a nice kid, but on fight night once that bell rings, he’s going to unleash. After September 17, the whole world will know who Liam Smith is.”

“Thank you Golden Boy for your partnership and efforts to make this a great event. HBO sees this as one of the signature events of 2016 with Canelo and Mexican Independence Day weekend.”

“It’s a privilege to be here today. This is the best arena in the world, and I’ve been all around the world and seen many venues. I can assure you that this is going to be the best fight. I know Liam Smith because I’ve followed him the last three or four years. Canelo, this will be a tough fight. Be ready to go toe-to-toe.”

WILLIAM KUNTZ, Executive Director of the Texas Department of Licensing and Regulation:

“Events like this help us showcase the great state of Texas. Oscar and Jerry, thanks for having us today.”